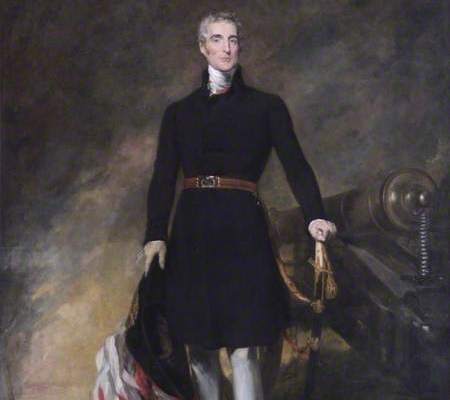 A few weeks ago, I visited Stratfield Saye, the Berkshire country estate of the Duke of Wellington. Acquired in 1817 as a reward for the decisive victory he gained at Waterloo two years earlier, grand plans were drawn up to knock down the old house and erect an enormous palace on the scale of Blenheim. As ever, Wellington refused to let good money go to waste, and insisted on retaining the beautiful old house, and with it a beautiful library.

My purpose in visiting was to access the Duke’s personal library. My question: was there anything among these dusty old tomes that might have sparked the genius he demonstrated in India, the Peninsula and finally and decisively at Waterloo? In advance, I had found a considerable quantity of early eighteenth century treatises on the art of war and military operations, usually written in peacetime by officers on half-pay kicking their heels and looking for something to supplement their income. None of these were apparent (although I only got as far as D in the immense two volume catalogue).

Unexpectedly, I found possible new dimensions being added to a man about whom I had only investigated the military side. Was he really that interested in birds? And fishing? Amongst the volumes of non-military material I did find several books on military operations, army field regulations and the like, but the earliest was dated 1811, and most originated after Wellington retired from active military service. I did find ‘Military Instructions for Young Officers Detached in the Field’ dating from 1774, and a ‘A Treatise on Military Discipline’ dating from 1759.

However, what caught my eye was a clear interest in military history. There was ‘The Commentaries of Julius Caesar’ published in 1677; a ‘Military History of Prince Eugene and the Duke of Marlborough’ published in 1736, and ‘Reveries, or Memoirs Concerning the Art of War’ by Maurice, Comte de Saxe.

The latter is particularly interesting. It’s not the first time I have encountered Saxe whilst researching where British Army officers got their ideas about tactical and operational innovation in the eighteenth century. One explanation is the new and challenging terrain and means of fighting that the British encountered between the 1750s and the 1790s. The other is previous experience, and reading about the experience of others.

Saxe had a long and distinguished career in the French Army, eventually receiving his marshal’s baton in 1743. Among his many military exploits, he fought the Ottoman Empire in his early twenties. This exposed him to irregular warfare and the use of loose and light troop formations. He adapted these ideas and deployed them in combination with regular infantry formations against the British at the Battle of Fontenoy on 11 May 1745 during the War of the Austrian Succession.

Saxe’s enemy at Fontenoy was the Duke of Cumberland, son of King George II. Cumberland observed the innovative use of varying troop deployments and adapted the technique for use against the Scottish Highlanders in the Jacobite Rebellion in 1745/6.

In an interesting book entitled Rebellion and Savagery: The Jacobite Rising of 1745 and the British Empire published in 2005, Geoffrey Plank analyses how following the suppression of the rebellion, Cumberland’s subordinates were appointed to key positions across the British Empire. They took with them the knowledge and experience of fighting the Highlanders. Among them was John Campbell, the Third Earl of Loudoun. He was appointed in 1756 to succeed Edward Braddock as Commander-in-Chief of British forces in America, following Braddock’s death during a catastrophic defeat against a joint Franco-Indian force on the river Monongahela in 1755. Out of the defeat, new ideas emerged about how to fight in the dense terrain in America. These closely resembled the approach favoured by Cumberland in Scotland and Saxe in Germany. Small wonder that Loudoun helped foster these reforms.

Unfortunately, Loudoun’s reforms did not take effect swiftly enough to prevent a series of further British defeats in 1756 and 1757. Loudoun was relieved of his command and succeeded first by his second, James Abercromby, and then Jeffrey Amherst. In 1758, the reforms instituted by Loudoun began to have their effect, leading to the year of victories in 1759, which saw the capture of Ticonderoga, and other lake forts on the American-Canadian border, and eventually the capture of Quebec, the capital of New France.

This swift canter through British and French military history serves to illustrate, at least in part, how ideas were transmitted. Saxe, arguably the progenitor of these ideas, also committed his thoughts on war to paper, and it is this book that once resided on Wellington’s book shelves. We’ll likely never know if Wellington read the book – although I am inclined to speculate that he did.

Let’s take a look at what Saxe had to say about fighting in enclosed countries:

It must be laid down down as one invariable maxim on all marches, to have parties, consisting of 100 men, always advanced in front, and upon the flanks, which must be sustained by others of double the same force … in order to be effectually guarded against all attempts whatever of the enemy… A partisan of enterprise and spirit, with 3 or 400 men, will find means to attack an army on its march, and to occasion a great deal of disorder and inconvenience. If he seizes an opportunity, at the close of the day, to cut off your baggage, he will be able to carry away a considerable part of it, without exposing himself to much danger; because, if he retreats between two passes, and makes a vigorous opposition in his rear, he will thereby check your pursuit… A stratagem of this nature must be attended with dreadful confusion. It is for these reasons therefore that advanced parties ought to cover all the avenues of your march; but they must never be too weak in numbers; for unless they are sufficient to oppose any attack, nothing less than ruin and disgrace can be the consequence…

In 1800, when he was just thirty years old, Arthur Wellesley fought an insurgency in Mysore, India. The way in which Wellesley configured his 8000-man force bears a striking resemblance to that described above by Saxe. You can read more about Wellesley’s counterinsurgency – his first independent command – in an article I wrote for Modern Asian Studies in 2010, as well as in my book Wellington’s Wars: The Making of a Military Genius.

Wellesley might not have read Saxe prior to his encounter with Indian insurgents. But the parallels are striking, whilst small but important pieces of evidence are starting to come to light that suggest military knowledge was passed from generation to generation, across continents and wars. Books, then, as now, were one way in which these ideas, experience and knowledge were transmitted.

8 thoughts on “What did officers read before Clausewitz?”