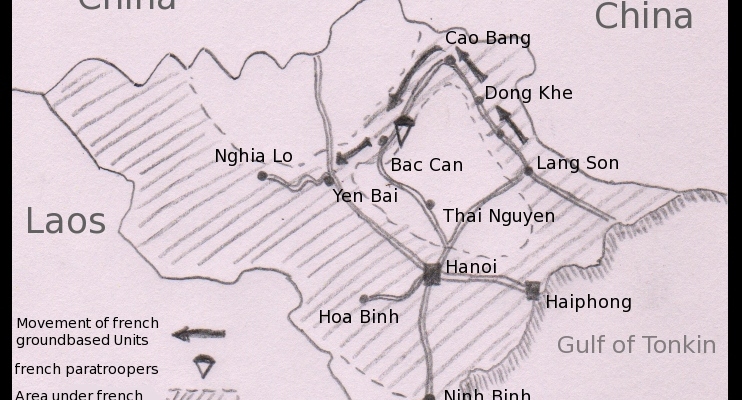 Forgotten Battles is a feature on Defence-in-Depth designed to bring long-lost battles back from the depths of history. Our authors have chosen these engagements because they believe that their significance has been overlooked or overshadowed by better-remembered battles in history. The significance of the chosen battles may have been strategic and influenced greatly a particular war or campaign or may be based on other factors, such as social or cultural impact or the way in which a battle shaped the thinking of future leaders.

If the question seems like a frivolous counter-factual, then it’s worth pointing out that it very nearly happened.

On 7 October that year the French Armed Forces launched Operation Léa, an offensive which brought together some 12,000 men under the command of General Raoul Salan. The principal aim of the operation was to seize the political-military leaders of the Viet Minh and smash their armed forces in their base area, a roughly triangular region of northern Tonkin known as the Viet Bac.

The plan was not without a touch of audacity. In the initial stage an airborne force was to be dropped directly on the key settlements of Bac Kan, Cho Don, and Cho Moi. At the same time, a stronger force of infantry, armour, and artillery would travel along route coloniale 4 (RC4), the main road from Lang Son to Cao Bang which passed roughly parallel to the Chinese border, before heading southwest to support the airborne force. Meanwhile, an amphibious force would travel up the Red River to provide support from the south.

Although the airborne assault plan for the opening day had been discovered by the Viet Minh intelligence network as early as 5 October, this information reached the HQ at Bac Kan just minutes before the first paratroopers hit the ground. As a result, Ho Chi Minh and General Vo Nguyen Giap barely managed to escape. French soldiers reported finding Ho’s daily correspondence, awaiting his signature, still laid out on his desk.

For the French, the semi-shock of the opening minutes proved to be the high point of an operation that quickly bogged down. The very act of transporting the 1,000-odd paratroopers to the drop zone over the Viet Bac took multiple trips over several hours. On the RC4, the mixed French column progressed slowly, only reaching the vicinity of Bac Kan by 13 October. The amphibious force moved more slowly still. The Viet Minh forces, meanwhile, were able to regroup and withdraw. After just over a month Operation Léa was called off.

The US-based academic Bernard B. Fall described Operation Léa as ‘a wild gamble at finishing the war in one single master stroke.’ Indeed, it is tempting to view the operation simply as an early milestone in a war of flawed operations, culminating in the ultimate catastrophe at Dien Bien Phu. Read in this way, Operation Léa offers further proof of the French army’s failure to understand the character of the war in which it was engaged, whether in attempting a pincer movement in a ‘war without fronts’ or utilizing armour in an inappropriate environment.

Yet such a conclusion does not tell the whole story. The First Indochina War – just like any war – had its own ebb and flow, and this offers a key to understanding why decisions were taken.

In 1947 the war was young. In Tonkin, fighting had broken out in the port of Haiphong and spread to Hanoi in December 1946. Over the winter, however, French forces succeeded in beating back Viet Minh troops from Tonkin’s delta region. Having fallen back on their base area in the Viet Bac, the Viet Minh position was one of relative weakness. And they could count on little outside support. Communist victory in the Chinese Civil War was several years off. Indeed, Ho had only recently managed to negotiate the withdrawal of Nationalist Chinese forces, which had moved into Tonkin along with the British following the defeat of the Japanese. Given these developments it is less surprising that the French Commander-in-Chief, Jean Étienne Valluy, felt confident that his forces could deliver a decisive result in the near future.

And there were other reasons why the need for decision was pressing. Thousands of miles away another imperial conflagration was erupting. The Madagascar uprising, which began in March 1947, resulted in the immediate diversion of a colonial division bound for Indochina. Even before these events, it was apparent that the government in Paris – primarily concerned, it must be remembered, with the reconstruction of France and wary of expensive imperial commitments – wanted to reduce troop numbers in Indochina, not increase them. And unlike in the war in Algeria that would follow, in Indochina the use of conscripts to bolster troop numbers was not deemed a viable option. Given the likelihood of future constraints, it was preferable to seek a short, sharp blow. Whilst this entailed the use of formations better suited to conventional war – armour in particular – the effectives available in 1947 were significant. As Fredrik Logevall has recently pointed out, Operation Léa was ‘almost certainly […] the largest military action in French colonial history to that point.’

Of course, such considerations cannot turn failure into success. Valluy and Salan discovered to their cost the difficulties of applying modern military forces across Tonkin’s thick jungles, steep peaks, and snaking rivers. These difficulties were compounded by a flimsy infrastructure that decades of colonial rule had done little to improve. The RC4, nominally a main arterial route, could hardly be described as a modern road: in places, one broken down truck could halt an entire column for hours. Unsurprisingly, the road became a notorious ambush spot. Even the seasons militated against swift success, as the French discovered in 1947. The long, rainy summer months brought the campaigning season to a close, thereby draining offensive momentum and allowing defenders to regroup. In this sense, the French were confronting many of the same challenges that they had faced in the consolidation of the region some sixty years prior, challenges that I explored in my recent book on the development of the French method for colonial pacification.

In that era, French ‘success’ had taken over a decade to achieve. In the post-Second World War era, it took the Viet Minh almost a decade to force a French withdrawal. Both were long and tumultuous processes. A heavy focus on the Battle of Dien Bien Phu as a sort of Battle of Tsushima for the age of decolonization – encapsulating the futility of the French fight, and indeed that of the West more broadly – may suggest the inevitability of defeat. But this, of course, is to read a war backwards. From the vantage point of 1947, French defeat in the Indochina War did not appear inevitable. Operation Léa, however flawed, was shaped by the strategic conditions of its time, and represented a serious attempt at resolving the burgeoning conflict in Indochina before it escalated further.

One thought on “Forgotten Battles: Operation Léa, Oct-Nov 1947: A wild gamble at finishing the Indochina War?”