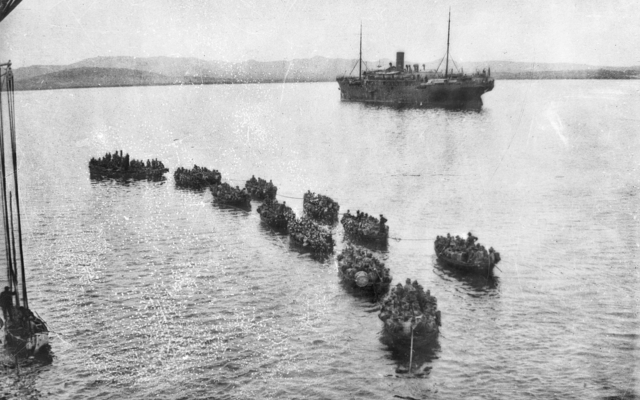 On 25 April 1915, units of General Sir Ian Hamilton’s Mediterranean Expeditionary Force landed on the Gallipoli Peninsula. The goal of this force was to clear the peninsula of Turkish defenders, and in particular their heavy artillery, in order to allow an Anglo-French naval force to sweep the Dardanelles Straits and converge on Constantinople. Attempts since mid-February to force the Straits by ships alone had floundered on the defensive combination of sea mines protected by heavy artillery based on the peninsula to the west and on the Asiatic shore to the east. Indeed, this attempt had been extremely costly – HMS Irresistible and Ocean, in addition to the French pre-Dreadnought Bouvet, were sunk, and the French pre-Dreadnoughts Suffren and Gaulois, and the battlecruiser HMS Inflexible were badly damaged by Turkish mines. British and French planners now expected that a landing by the four divisions of Hamilton’s force, supported by a diversionary landing by a French division at Kum Kale on the eastern side of the Straits, would quickly deal with the land-based Turkish defenders allowing the Straits to be swept clear of mines, which would permit the Anglo-French fleet to advance on Constantinople.

The land-based operation was to be anything but smooth. The Turkish defenders held the high ground, and although the initial landings were successful, they became largely stalled on the beaches. All attempts to break out of the beachheads were defeated by a stout Turkish defence, and a further landing on 6 August at Sulva Bay was similarly boxed in by the defenders. Losses throughout the operation had been high and the gains negligible. In December and early January, the Allied forces withdrew successfully from their beachheads with the last Allied troops departing on 8 January 1916.

Operations at Gallipoli attracted considerable attention from the rest of the world. From the start, US military and naval attaches in London, Paris, and Constantinople sent reports back to Washington on the operation. Many of these can still be found in the US Army War College Division papers held in the US National Archives (Record Group 165, Microfilm Publication M1024). Two sets stand out and provide an interesting view on how these observers assessed the Anglo-French offensive and the Turkish defensive campaign through most of 1915. The first is a series of reports by LtCol T.C. Treadwell, USMC, who served as the US naval attaché in London. Treadwell’s reports begin in May 1915 and run to February 1916. The second is a 165-page report written by Capt. H.L. Landers of the Coastal Artillery Corps, for the US Army War College Division. In the absence of a formal military intelligence agency, the War College Division served as a rudimentary intelligence section, and Landers made use of a wide range of sources, including other attaché and observer reports of the campaign. Only four copies of Landers’ report were made, suggesting it was a sensitive document. These contemporary reports offer us an interesting insight into how the campaign was perceived at the time by neutral observers, before myths about the operation had been fully formed and obviously before the outcome of the First World War was known.

One of the first observations that strikes a reader of these reports is how impressive the scale of the operation was to contemporary observers. Although amphibious operations were not new to warfare, opposed landings involving an initial landing force of four divisions supported by a major naval force was unique. All of the observer reports noted the large numbers of land and sea forces involved throughout the campaign and spoke about the skill in which the opposed landing was carried out and supported from the sea. Treadwell’s reports in particular emphasized the joint nature of the campaign. He noted the way in which the land and naval forces were dependent upon each other and that, for the most part, these worked well together through most of the campaign. Indeed, Treadwell and Landers both particularly praised the cooperation between the army and the navy during the tricky withdrawal from the Peninsula in December 1915 and January 1916. Cooperation between the army and the navy was about the only redeeming feature Treadwell and Landers could find from the Allied campaign, which Treadwell characterized as ‘ill advised, ill conducted, and disastrous.’

The two observers were keenly aware of the wider strategic context of the Gallipoli operation. Today, we tend to remember the Gallipoli campaign in isolation. To the US observers, though, its success and failure was firmly linked to operations on the Western Front and in the Balkans. Both Treadwell and Landers believed that the Allied forces engaged on Gallipoli would have increased considerably the chances of the Allied on the Western Front in 1915. Treadwell noted ‘The Dardenelles campaign simply served to squander important resources on a subsidiary operation with disastrous results.’ It was, however, the more local strategic context that ultimately was the most significant factor in the campaign. In his report of 7 January, Treadwell noted: ‘…any success [in the campaign] was dependent either on the failure of the Turkish supply of munitions or on a successful landing in force at some new position. Both of these chances were, however, lost by the turn of events in the Balkans in September and the entry of Bulgaria into the war on the side of Germany. From that time, not only was all present hope of forcing the Dardenelles lost, but the force on Gallipoli was placed in a very dangerous position.’ Indeed, both Treadwell and Landers criticized the British and French governments for not doing more to bring Bulgaria on to the side of the Entente before launching the ill-fated operation. Landers wrote: ‘there is much in the diplomatic efforts and failures of the [foreign] ministry deserving of severe censure.’

The reports also emphasized that the failures at Gallipoli represented a serious strategic setback for the Entente and for Britain more specifically. The failure to win Bulgaria or Greece to the Entente side was both a consequence of and a contributing factor to the failures of the Gallipoli operation. Treadwell and Landers both noted that as it became clear that both the sea and land campaign had failed, the attitudes of the neutral Balkan countries hardened. Indeed, the failures in the campaign clearly damaged the military reputation of the Entente, and hence belief in their ability to bring the war to a successful conclusion. Treadwell wrote: ‘The Dardenelles Campaign as a whole…stands out as one of the most disastrous failures with which the British forces have ever been involved.’ Additionally, the observers also noted that the Turkish success at Gallipoli had done an enormous amount to restore the confidence in the Turkish army and state that had been lost by military failures in the Balkan war and the early stages of the First World War. As a result, they foresaw the Turkish forces being able to play a more prominent role in the war.

For Treadwell and Landers, the reasons for the failure of the entire campaign were clear. Landers’ report speaks for the conclusions reached by both observers:

[The Gallipoli campaign] suffered because of the requisite element of secrecy was quickly lost, and because the first attack was not made in overwhelming combined military and naval force, which alone would have rendered rapid success possible. It revealed in its earliest stages insufficient thought about the best methods to be pursued. It was begun before Great Britain had taken stock of her supplies of men and munitions, in that careful and comprehensive manner which should have been an imperative prelude to a definite decision. The naval operations were marred by preconceived beliefs about the utility of warships in such an attack, which proved to be erroneous. The land operations were marred by attacking in insufficient strength and at wrong points.

Ultimately, Landers put these failures down to poor strategy formulation in the British government, which was seen as the progenitor of the campaign. Not only had the British government failed to lay the required diplomatic groundwork in gaining the Balkan neutrals for the Entente, it had failed to recognize the efforts that would be required to conduct a campaign like the Gallipoli operation. Landers ascribed this failing, in no small part, to the lack of an effective strategic staff in London. He wrote: ‘There had been an excellent General Staff in operation prior to the outbreak of the war, but when the crisis came it vanished. Its most distinguished members, with but few exceptions, were taken for commands in the field…the first emergency was met by sending abroad the very men who should have been kept at the center.’

Of course, the reports by Treadwell and Landers represent only two views of the Gallipoli campaign. However, with access to contemporary observations and some key decisionmakers, these reports provide the closest thing to an ‘official’ view of the US military on the Gallipoli operation as it unfolded and immediately after its conclusion. They show clearly that the failure at Gallipoli had a major impact on how neutrals saw the strategic chances and the military abilities of the Entente in 1915 and early 1916.

Image: Australian troops being towed ashore in lighters to land at Anzac Cove, Gallipoli. In the background is the transport ship. Photo courtesy of the Australian War Memorial.

3 thoughts on “From the Archives: A Disastrous Campaign: The US View of Gallipoli”