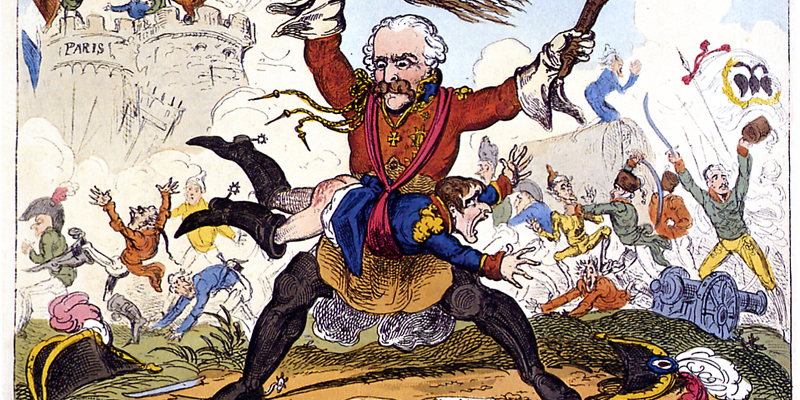 ‘Napoleon has humbugged me, by God; he has gained twenty-four hours’ march on me’. With these words, uttered in an anteroom at a ball famously hosted by the Duchess of Richmond three days before Waterloo, the Duke of Wellington, commanding an allied army composed of Dutch, Belgian, German, and British troops ordered his force to concentrate at a small strategic crossroads south of Brussels, called Quatre Bras.

Napoleon had, indeed, fooled Wellington. Over the days preceding, Wellington had received conflicting intelligence about French intentions. Napoleon was attempting to convince his enemy that he would attack through the town of Mons, and then outflank Wellington’s position on the right and cut off the British line of retreat to the channel ports of Antwerp and Ostend. This was Wellington’s greatest fear, but he also offered him an opportunity to act as the principal instrument of Napoleon’s demise.

Tensions existed within the alliance that had assembled itself to resist Napoleon’s return from exile in Elba. Following Napoleon’s initial abdication in April 1814, representatives of the victorious powers congregated at Vienna to re-draw the map of Europe. Difficulties arose of the fate of Poland and Saxony. Russia wanted control of Poland, including its sizeable population, and Prussia control of Saxony. Britain, Austria and Royalist France were concerned about the growth of a powerful Russo-Prussian power bloc in Eastern Europe and resisted this move. Tensions flared until a new European war seemed a genuine prospect.

Eventually Russia accepted partial control of Poland, and Prussia made do with a third of Saxon territory. When news of the climb-down reached Berlin, the Prussian Army viewed the eventual treaty as insufficient recompense for the contribution it had made to the defeat of Napoleon in 1813-1814.

When Napoleon escaped Elba, the allies quickly set aside their differences and renewed the Treaty of Chaumont, under which each of the Great Powers committed at least 150,000 troops to the fight against Napoleon, and promised to stay in the war until Napoleon was defeated and either dead or once again under lock and key.

But tensions still existed, and the Prussians saw an opportunity to avenge their treatment at Napoleon’s hands in 1806, and re-write the treaty signed in Vienna. To do this, they would have to be able to claim a significant stake in the battle that defeated Napoleon. Wellington, who had been present in Vienna at the climax of the negotiations, was aware of this, and was keen to prevent such an event, since it might jeopardise Britain’s war aims.

To some extent, then, Wellington was hoping that Napoleon would outflank him, and he would be forced into a situation where the Anglo-Dutch force would take the brunt of the fighting against Napoleon. Blücher and the Prussians would play a secondary role in the battle, and therefore acquire fewer chips to cash at the peace table following Napoleon’s defeat. In so doing, Wellington was mirror-imaging – he was assuming Napoleon would act as he would in the same circumstances.

In fact, Napoleon decided to attack the central position, the weak point linking Wellington’s and Blücher’s army, in the hope of splitting the two and defeating them in detail. It was news of this that Wellington received at the Duchess of Richmond’s ball. Humbugged, indeed.

The battles that took place on 16 June 1815 would, had they not been followed by the great encounter two days later, have stood out themselves as great engagements. Wellington deployed his forces into a line running east to west across the Quatre Bras crossroads. As units arrived on the field, they were deployed into position, plugging gaps that had developed. It was a mark of Wellington’s generalship that he got his army to concentrate from such a widespread distribution as he had on 15 July.

By contrast, Blücher received an onslaught from Napoleon’s army in an exposed position centred on the village of Ligny. Wellington advised him to deployed behind a slope north of Ligny near Sombreffe, but Blücher preferred to meet Napoleon head on. His army paid a high price, suffering considerably as a result of Napoleon’s well-positioned artillery.

By the end of the day, Wellington had managed to hold off a persistent challenge from Marshal Michel Ney, whilst the Prussians, temporarily commanded by Blücher’s chief of staff, August Neidhardt von Gneisenau, were forced out of their positions.

Although victorious at Ligny and achieving a score-draw at Quatre Bras, the French had undoubtedly under-performed. Twenty-two years of war were beginning to show. Ney, an extremely brave but impetuous soldier, behaved erratically, and was probably suffering from some form of Post-Traumatic Stress Disorder after a particularly intense three years of warfare in Russia, Eastern and Central Europe and Germany. But Napoleon’s greatest weakness was the absence of his right hand man, Marshal Louis-Alexandre Berthier, who had died suddenly in Vienna after falling through window on 1 June.

Berthier had been Napoleon’s chief of staff, and he was exceptionally skilled at translating Napoleon’s sometimes erratic and wild plans into recognisable and realisable orders. All dispatches were prepared in triplicate, two sent out (to ensure at least one was received) and the third held in a ‘Sent’ tray. Upon confirmation the dispatch had been received by its intended recipient, this copy was transferred to a ‘Received’ tray. The system was simple but it ensured Berthier, in an age of slow and unclear communication, knew precisely who knew what.

During the Waterloo campaign, Berthier’s shoes were inadequately filled by Marshal Nicolas Soult, a fine tactician, but ineffective staff officer. Gone were the clear articulation of Napoleon’s intent, and gone was the clear-sighted communications system. The result was close to chaos. Marshal D’Erlon, marching to support Napoleon at Ligny, was presented with order and counter-order, such that he marched and counter-marched between Quatre Bras and Ligny. At either he would have had a decisive effect, but his corps never entered action.

Despite intense suspicion of the British, Gneisenau ordered a retreat northwards rather than eastwards from Ligny, understanding that Blücher’s intent was to support Wellington in a second engagement. Blücher himself had briefly gone missing after being trapped under his horse which had been shot from under him. His soliders had covered him in a cloak to prevent his discovery by French cavalry. Returning to command he was pleased to find Gneisenau had ordered the retreat northwards, and sent word to Wellington that the Prussian army would support the Anglo-Dutch army if it fought a second battle.

Wellington himself withdrew in good order from Quatre Bras and through the 17 June his rear-guard, particularly the cavalry fought several successful actions to keep the French at bay.

Three days earlier, at the Duchess of Richmond’s Ball, when he had first received news of Napoleon’s attack through Charleroi and on towards Ligny and Quatre Bras, Wellington had anticipated he could not stop Napoleon at Quatre Bras. ‘We shall not stop him there’, he had muttered, and pointing to a ridgeway on the map, said ‘If so I must fight him there’.

Wellington’s destination was the ridge of Mont St Jean, a strong defensive position that he had reconnoitred the previous year, and which the Duke of Marlborough had even identified over a hundred years earlier as a good location from which to defend Brussels. The scene was set for the the climactic Battle of Waterloo.

One thought on “The Road to Waterloo”