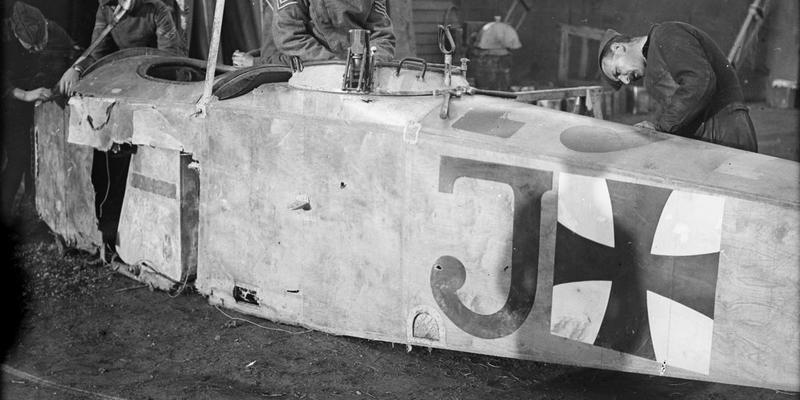 100 years after the conclusion of the Battle of the Somme, there is still a tendency – a quite understandable one – within the wider public discourse on the First World War to concentrate upon the first day of the Battle, on 1 July 1916 because of its appalling casualties, and to overlook the fact it was part of a broader campaign which concluded on 18 November 1916, with the ending of the Battle of the Ancre. The long casualty lists dominate our perspective, and when historians look at the wider swathe of the Somme campaign, they tend to focus upon aspects such as strategy and tactics and innovations such as the first use of the tank at Flers in September. Yet there were other innovative uses of weapons seen on a large scale during the Somme campaign, notably in the use of British air power. The Royal Flying Corps (RFC) and Royal Naval Air Service (RNAS) had demonstrated the utility of aircraft from almost the start of the war, particularly in the realms of reconnaissance and artillery observation. The RNAS’s early attempts to bomb German targets (notably Zeppelin sheds) hinted at the future potential use of aircraft in the long-range attack role, and the RFC took the first steps to what would become an extensive part of aerial activity in 1917 and 1918 through what we would now term interdiction and close air support. All of this was underpinned by a firm recognition that fighting for control of the air was a vital element, since it was impossible to enable the other activities to take place without significant interference from German aircraft if this were not obtained.

It is perhaps unfortunate that the role of fighter aircraft became central to accounts of the use of aircraft during the war, because of the supposed glamour associated with aerial combat, embellished by newspaper accounts and overwrought rhetoric from the likes of Prime Minister Lloyd George, waxing lyrical about the ‘cavalry of the clouds,’ since this has obscured the fact that the critical business of the Flying Corps was that of gaining information and correcting the fire of the artillery pieces which dominated the war of static lines that had evolved after the initial war of manoeuvre in 1914, and which predominated until 1918 when mobility would return to the battlefield. As a growing canon of historiography of air power demonstrates, this awareness of the inter-relationship of air combat and the less-well known aspects of air operations has become more widespread, but is perhaps not as widely appreciated as might be the case.

When planning the Somme campaign, the RFC held an integral part, since the BEF would place heavy reliance upon artillery to prosecute the offensive, and would require information about enemy dispositions behind the front line – something which could only be obtained from the use of aerial reconnaissance. The challenge facing the RFC was that the Somme battle would be on a much grander scale than anything that it had done before, and the rate of expansion of the air service between late 1915 and spring and summer 1916 had been such that many of the new squadrons to be found in France were dominated by pilots and observers who had received relatively little training, and whose experience levels were notably lower than those who had fought in the battles of 1915. The Germans’ qualitative advantage in fighter aircraft during the so-called ‘Fokker Scourge’ had increased RFC losses, and only the appearance of new fighter aircraft such as the DH2, a ‘pusher’ fighter which looks odd to our eyes today, had redressed the balance. While the chances of operating with reduced levels of interference from the German air services had grown, failings in training and thus the observation that resulted were to prove a problem throughout the Somme campaign. To make matters worse, as the battles of Autumn 1916 demonstrated, the German air service had begun to introduce new fighter types which would tilt the balance in their favour, reaching to a nadir in the losses of ‘Bloody April’ in 1917. Nevertheless, the commander of the RFC in France, Brigadier-General Hugh Trenchard, pursued a policy of a constant offensive over German lines, seeking to dominate the airspace in the battle area by the expedient of keeping enemy aircraft as far away from it as possible – preferably over their own lines – allowing the observation aircraft to go about their work relatively unmolested (RAF Museum, Trenchard Papers MFC 73 ‘Future Policy in the Air’, 22 September 1916.). That this policy is open to legitimate criticism because of its blunt, often inflexible, nature and the casualties which resulted is beyond doubt – but so is the fact that it broadly achieved its aim on many occasions. This was particularly true for the Somme offensives, which has been described as a ‘golden period for the RFC’ (See James Pugh’s excellent PhD thesis ‘The conceptual origins of the control of the air: British military and naval aviation, 1911 – 1918’ (University of Birmingham, 2013) for a detailed consideration).

Confidence in the ability of artillery to destroy the German front line positions, and particularly the barbed wire before them, proved to be sadly misplaced on 1 July 1916, but the work of the RFC was not the critical factor – as historians such as Shelford Bidwell, Toby Graham and Sanders Marble have demonstrated, the failings in the artillery scheme for 1 July went far deeper than the quality of aerial observation. And even though the cooperation with the guns did not reach the levels hoped for it, the after-action reports from Fourth Army as it sought to learn the lessons from the Somme offensives demonstrate that senior commanders still placed great importance on the use of the RFC’s army cooperation squadrons. It was noted that in poor weather, when the RFC had been unable to fly, artillery commanders, anxious to prepare the battlefield, had compensated for the lack of aerial observation by the expedient of firing twice as many shells in the general direction of the target (based on knowledge usually derived from air reconnaissance) in the hope that the greater weight of fire would increase the chances of hitting the target (National Archives, WO 95/431, ‘Lessons of the Somme’, Fourth Army War Diary 1916). This had been nothing more than optimism and a waste of ammunition. Generals Rawlinson (Fourth Army) and Horne (First Army), both made clear their view that aerial observation would be a vital component in any future offensive and that the quality of information gained and the skill with which artillery fire was directed needed to be improved. This had, in fact, been appreciated by the senior commanders of the RFC, notably Generals Henderson (Director General of Military Aeronautics and GOC of the RFC) and Trenchard (GOC of the RFC in France), with the latter making strenuous – and sometimes slightly over-optimistic – efforts to demonstrate that the quality of the pilots and observers reaching the front line was improving as better training regimes were applied (National Archives, Air 1/524/16/12/26, ‘Cooperation between aeroplanes and artillery’, notes by Trenchard on observations by Generals Rawlinson and Horne).

What is perhaps significant in considering the Somme as the proving ground for a notable air contribution to a campaign is, therefore, the extent to which air and land elements interacted and then thought about what had worked and what had not was considerable; there was no technophobia at work with aircraft seen as peculiar items that, as the stereotype later had it, simply frightened the horses. The fact that it was necessary to use air power to help win battles was now something which the BEF and its commanders took as read, rather than as something open to doubt and mistrust. The failings and disappointments of 1916 would and could not be overcome immediately – it took time before the training regime was reorganised to the point where it began to deliver aircrew with appropriate skills to the front line; the loss of control of the air in early 1917 cost more lives and aircraft and was not overcome until the early summer of that year, and yet more work was required to ensure that air and land units, particularly the artillery, cooperated in the most effective and efficient manner possible. Yet for all of this, the Somme was the first large-scale battle in which it could be said that Britain began the full application of its air power capabilities. While attempting to mark the Somme offensive as the exact point at which Britain ‘got’ air-land integration and made it work is to stretch the evidence too far, it does not seem unreasonable to suggest that it was the first proper proving ground upon which the formidably effective air-land co-operation seen in the final battles of 1918 would be built.

Image: Air mechanics dismantling an Albatros C.III two-seat biplane (J7) brought down during the Battle of the Somme at the 9th Wing RFC HQ at Fienvillers. Courtesy of Wikimedia Commons.

One thought on “The Battle of the Somme: The First Proving Ground for British Air Power?”