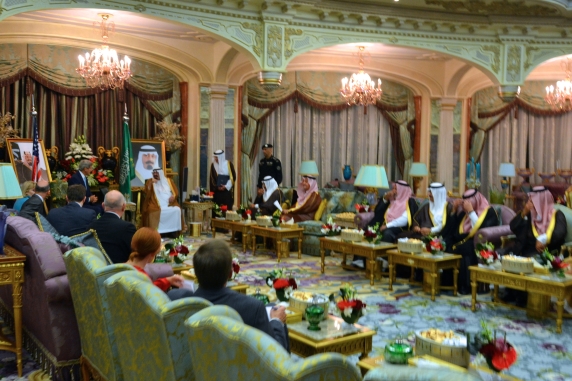 This is the second post in a series of posts to come out of the ‘Regional Study Day: The Middle East’, held at the Defence Academy of the United Kingdom on 13 May 2015. This study day was organized by the Defence Culture and Languages Centre (DCLC) and the Defence Studies Department’s  Regional Security Research Centre. by Dr DAVID B ROBERTS In 2010 at a conference in Riyadh, an academic presented a cogent case as to why the fiscal picture for Saudi Arabia was, in the medium and long term, looking grim. His figures were correct, and his conclusions were not hyperbolic, but sensibly grounded in the facts. Nevertheless, all the Saudi participants around the table, ranging from ministers to CEOs to academics to the state’s leading journalists, greeted the presentation with a weary shrug. Their point is that they had seen just such cogent presentations every five years for decades and yet the sky never did quite manage to fall in. It would be, therefore, really quite a significant call to suggest that on this occasion, as opposed to the countless previous assertions, Saudi Arabia is actually facing some kind of a crisis. Yet, it appears that the state may well be entering just such a concerning phase. At the core of this thesis, there are three interlinked factors that are facing quite unprecedented change and these changes look set to – at the very least – vastly complicate the already Gordian difficulties facing the Kingdom.

Saudi Arabia is, understandably, a state synonymous with oil. The substance has transformed the state entirely and continues to be the centre of gravity of the state’s economy. Yet it could be argued that there are vast supply and demand-related changes afoot that may fundamentally undermine the state’s central reliance on its black gold. On the demand side, the central problem is that it is rising in places that Saudi Arabia does not really want it to rise, and falling in places where it would rather it didn’t. Most importantly, demand is rising within the country. This is not a good thing. Given the subsidies that exist for oil and its derivative products, the government loses money refining and processing oil for its domestic market as well as having less oil to sell internationally. There are even studies noting that Saudi Arabia may be a net oil importer by the late-2030s, a notion that indicates just how much of a paradigm-shift the Kingdom may be about to undergo. Otherwise on the demand side, as America becomes ever more self-sufficient, the importance of Saudi Arabia declines, if it doesn’t disappear given the US’s reliance on a stable Gulf region is critical to its economy. That this drop in US demand is being picked up by China is a boon, but even growth in China is slowing relatively speaking and nor is China in any position in the foreseeable future to provide Saudi Arabia with any kinds of security guarantees. In terms of supply too, Saudi Arabia’s dominating role in the oil industry may be under threat. Eventually, the likes of Iraq, Kurdistan, Libya, or Iran – all of which have huge oil reserves – are likely to add in a few more millions of barrels per day in oil to the market. Similarly, the unconventional hydrocarbon revolution has allowed states to tap reserves of oil and gas that were previously uneconomical. This means, first and foremost, that America may transition to an oil exporter – a large one – by the end of the decade; something that will upend the recent dynamics in the market. These factors coalesce to present Saudi Arabia with a range of problems. At a time of burgeoning budgets inspired by a fear of the Arab Spring and growing youth unemployment, the state looks destined to spend even more on its subsidies. Meanwhile, the plunging oil price that looks set to stay nearer $50 per barrel than the $100 that markets and states had become used to, robs the state of further income. This all means that the state will run a budget deficit for the first time in years in 2015 and will continue with them for years to come. With low interest rates on the international market, huge foreign reserves, and being relatively debt-free to start with, this is not that problematic in the short-term at least. But the fiscal medium and long term look decidedly murky.

Historically, the Gulf states do not really use their militaries in an expeditionary fashion. They have preferred to rely on alliances, defence guarantees, and international coalitions where possible. But this is slowly changing, and the states are demonstrating a willingness to actually use their expensively assembled military kit around the Middle East. This is most clearly seen in the recent Saudi-led large-scale bombing campaign in Yemen. There are a variety of likely causes of this increased desire to utilise their forces. The increasing Gulf disenchantment with America in recent years has now become palpable. After America dropped their long-term ally Hosni Mubarak in Egypt, Gulf leaders were irate, fearing, ultimately, that America may too one day drop them. This fear of being left alone by America was exacerbated by the ‘Pivot to Asia’ rhetoric and utterly compounded by America’s negotiations with Iran; something Gulf states fear will hasten America’s departure from the region, leaving an emboldened Iran to dominate. The sense is, therefore, that Saudi Arabia is pointedly noting that if America will not secure the region, then they will. And they are clearly willing to utilise their military capacity towards this end. None of this bodes well for the future. While America and her allies may well have blundered, spectacularly at times, in the Middle East, the local knowledge of Saudi Arabia is hardly affecting a different outcome so far: the bombing campaign in Yemen has been a brutal, ineffectual one to date. Moreover, Gulf states, unencumbered by the restraint inherent in believing the America will ultimately back them up, may act on their Iranian paranoia, further adversely affecting security in the region.

Succession in Saudi Arabia has long been a source of concern. In particular, many have been focused on the jump of leadership to a new generation of al-Sauds. Since the state’s modern inception in 1932, the Kings have all been sons of the founder, Abdul-Aziz al-Saud. This has meant that recent Kings and their successors have been exceedingly old and, on occasion, infirm. Two Crown Princes, for example, died in office waiting for now former King Abdullah al-Saud to pass. But this gap has been breached. In a recent reshuffle, King Salman bin Abdul-Aziz ejected his brother, Prince Muqrin, from second in-line to the throne, and replaced him with a grandson of Abdul-Aziz al-Saud, Mohammed Bin Nayef al-Saud. More interestingly, he also installed his own son, Mohammed bin Salman, as the third-in-line to the throne. These two Mohammeds now have portfolios spanning all of the most important sectors of the Kingdom. The jump to the 55-year-old Mohammed bin Nayef is no surprise and no cause for alarm. He is widely recognised as the leading candidate of the younger generation, and has steadily but effectively built up a reputation, internally and externally, as a diligent and effective minister. But the jump to the 29-year-old Mohammed bin Salman is deeply surprising, if not shocking. He has emerged from nowhere to, in but a few months, be made Deputy Crown Prince, Minister of Defence, head of the centrally important economic committee, and Chairman of Aramco, the Saudi national oil company. The implications of this shift are concerning. Age and seniority are important aspects of Saudi social and political life. It is unclear how so completely trouncing established and widely regarded cultural rules will be received in the longer term. Similarly, both Mohammeds and the King himself come from the same Sudairi clique of the al-Saud. King Salman has, therefore, engineered that his section of the family hold practically all the most important portfolios and he has attempted to make sure that they will hold them for decades to come. Instead of the typical balance between Sudairis and non-Sudairis, this leaves most members of the latter camp completely disenfranchised. Perhaps installing a young Deputy Crown Prince will prove to be a master-stroke, giving the aged Saudi leadership a voice for Saudi’s youth who dominate the state overall. But, taken together, the mix of a deteriorating fiscal situation, a far more militarily assertive foreign and security policy, controlled by a new leadership overseeing a delicate power balance, does not give confidence as to the longer term stability of the state. Photo: U.S. Secretary of State John Kerry meets with Saudi King Abdullah bin Abdulaziz Al-Saud in Jeddah, Saudia Arabia on September 11, 2014. [State Department photo/ Public Domain]

One thought on “Saudi Arabia and Its Challenges”