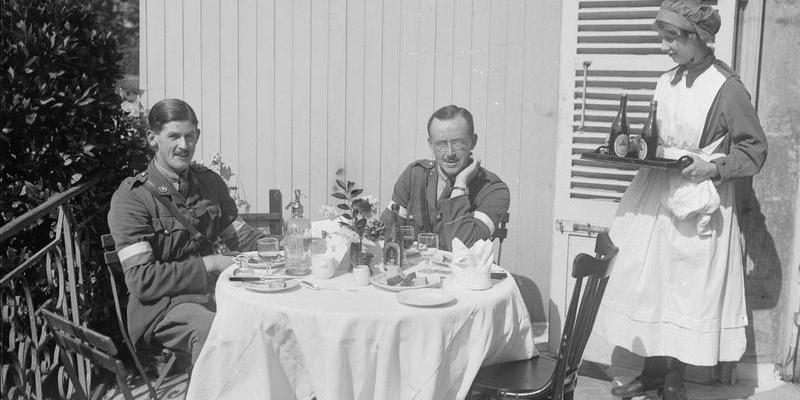 This is the third of several posts running on Defence-in-Depth over the next few weeks arising out of the Military Learning and Innovation Roundtable held at the Joint Services Command and Staff College on Wednesday 17 June 2015. The roundtable explored the various ways in which armed forces have learned, adapted, and innovated in times of war and peace, austerity, and pressure from the eighteenth century to the present day. You can read more about the aims and objectives, research outputs, and future events of the Military Innovation and Learning Research Group at www.militaryinnovation.org. Podcasts from the roundtable are available to download here.

When we think of the British army in the First World War, our thoughts usually turn towards the Western Front. Trenches, barbed wire, and mud are the stock images; while the experience of the British Expeditionary Force is conflated with that of the British army as a whole. My interest in the British army of the First World War lies beyond the Western Front – in the so-called subsidiary theatres, which included Egypt, Gallipoli, Italy, Mesopotamia, Palestine, and Salonika. Given that over a third of the army’s combat formations saw service in these theatres, it is surprising how little we know about the ways in which these theatres interacted, how they shared expertise, and how they learned from each other. This is even more surprising given its relevance to the modern British army and its recent simultaneous campaigns in Iraq and Afghanistan.

To understand how the army learned during the First World War, we need to understand its pre-war ethos. As Robert Foley has written here and here, this ethos or culture shapes how an institution learns and the methods it uses to do this. This pre-war ethos was incredibly important to the army of the First World War. It not only survived the turmoil of this conflict, but it provided the army with an enduring framework that enabled it to learn and adapt to the challenges of modern war. Shaped by perceptions of national character, geostrategic realities, and the relative homogeneity of the officer corps, the army’s ethos was rooted in pragmatism. It prioritised principles over prescription. This was an ethos that encouraged flexibility. I believe it was this flexibility that enabled the British army of the First World War to recalibrate its approach to learning. It facilitated its move from a highly individualised approach to one that was far more standardised. Such a move was necessary given the rapid expansion of the army, its increasing global commitments, and its increasingly civilian composition.

The ‘civilianisation’ of the army meant that a singular reliance on principles and oral tradition was unfeasible. As early as December 1914, the army began producing military publications known as CDS and later as SS pamphlets. These publications were farmed out to the various expeditionary forces across the globe, exposing them to the latest Western Front tactics and methods. Lieutenant-General Sir William Birdwood, commander of the Australian and New Zealand Army Corps, received these initial publications by January 1915, allowing him to train his men in line with the latest guidance from the principal theatre. Essentially, these publications ‘pushed’ knowledge on to the various theatres – irrespective of need or relevance. On the face of it, the mass production of these publications would suggest that the army had abandoned its pre-war ethos, but this was far from the case. While these publications represented an attempt to codify and standardise knowledge, it remained up to each expeditionary force to decide whether to use or ignore this knowledge. In this respect, the institution was delegating to the periphery, perpetuating its belief in the ‘man on the spot’.

Although formal methods such as publications offered a way of making knowledge tangible and explicit, the army relied heavily on informal or ‘non formal’ methods. My belief is that the army used formal and informal methods in equal measure and I would even go so far as to say that its culture facilitated this dual approach. However, where these informal methods differed from publications is that they allowed expeditionary forces to pull in knowledge that was immediately useful to them. Both Huw Davies (here) and Sergio Catignani (here) have highlighted the importance of these informal networks to the British army of the eighteenth and twenty-first centuries respectively. This was no different for the British army of the First World War. In all walks of life, people are more likely to turn to each other, rather than a manual, for relevant information. Yet, for this to work, there needs to be a connection, a pre-existing relationship. In the army, this could be through shared attendance at Sandhurst, Woolwich, the Staff College, or membership of the same regiment. It could also be more social or personal in nature, such as marriage, or membership of the same hunt or gentlemen’s club. Finding evidence for such interchanges is difficult, but it does exist albeit at higher levels of command. General Sir Henry Rawlinson, for example, shared Western Front tactics with Major-General Sir Walter Braithwaite out in Gallipoli. They were both on the directing staff at Staff College pre-war. Rawlinson, again, shared best practice relating to water supply with Lieutenant-General Sir Philip Chetwode who was out in Palestine. Both were Old Etonians and members of the Turf Club.

The army could not prevent these informal exchanges. Quite the opposite, in fact: it recognised and attempted to exploit the power of social networks and conversation. Opportunities for socialising were bolted on to formal training schools. The Royal Engineers schools at Le Parcq and Blendecques held ‘smoking meetings’ and conferences, providing ‘an invaluable opportunity for exchanging ideas’. The staff schools at Mena House in Cairo and the University of Cambridge had mixed cohorts of officers from the Western Front, Palestine, and Salonika. Efforts were made to keep these conversations going at the end of these formal courses, providing a space for these individuals to share their personal experiences.

The danger of splitting the army’s learning methods into formal and informal camps runs the risk of simplifying what was an incredibly complex process. It also obfuscates some of the underlying organisational tensions that existed within the army: ad hoc-ism vs standardisation, principles vs prescription, and diversity vs uniformity. These tensions were ever-present. The army managed these tensions by encouraging expeditionary forces to innovate within flexible institutional parameters. These forces employed different approaches, leading to considerable diversity based on the situation in hand. But it also meant that learning was far from even. By further examining the links between the army’s operational theatres, we are rewarded with a greater understanding of how the army learned as an institution, as well as a fuller appreciation of the challenges associated with learning and innovation in wartime.

8 thoughts on “Beyond the Western Front: Inter-Theatre Learning in the British Army of the First World War”