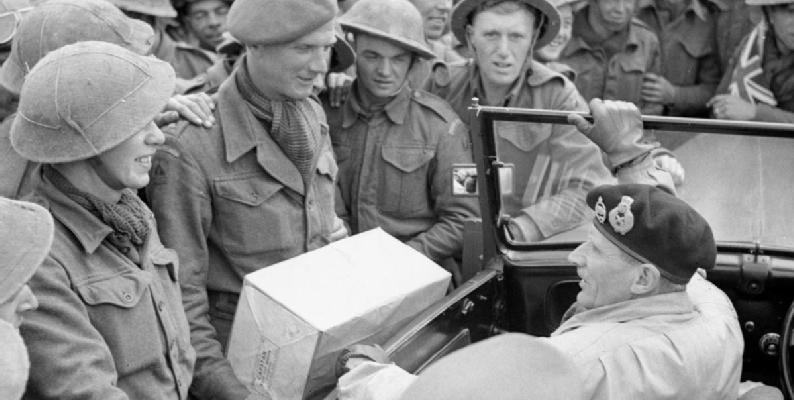 In a previous blog post, I argued that by assessing rates of sickness, battle exhaustion, desertion, absence without leave and self inflicted wounds (SIW) in an army, morale can be accurately, and in a statistically robust way, measured. This methodological innovation makes it possible to assess and graph levels of morale in British Second Army during the Northwest Europe campaign of the Second World War. 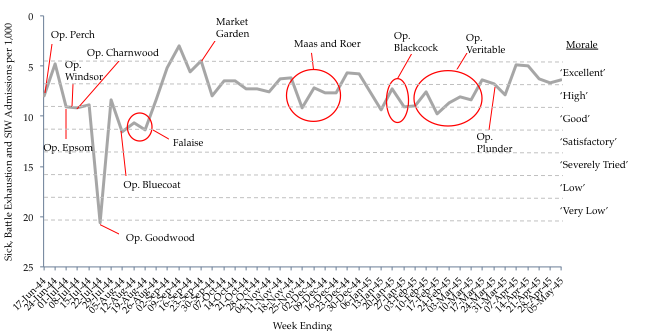 Figure One: Second Army, Weekly Admissions per 1,000 to General Hospitals and Casualty Clearing Stations for Sickness, Battle Exhaustion and SIW, 11 June 1944 to 5 May 1945. Morale scale equivalents are presented on the right hand Y-axis.

The picture of morale that emerges from Figure One shows clearly that, while morale was, on the whole, high to excellent for much of the campaign, it did dip at some critical moments in July and November 1944 and January and February 1945. It could barely be described as ‘good’ during operations in the first half of August 1944, notably during Operation ‘Bluecoat’ and the attempt to close the Falaise pocket, and was seriously problematic on one occasion, during Operation ‘Goodwood’ in July 1944.

This analysis of morale supports the conclusions of much of the recent historiography on the British Army in Northwest Europe; morale was a necessary component of combat effectiveness (morale in Second Army was broadly speaking high throughout the victorious campaign); however, morale was not a sufficient explanation for Second Army’s successes and failures on the battlefield. For example, morale would appear to have been at its highest before and during Operation ‘Market Garden’. But ‘Market Garden’ was a failure. It is likely, as John Buckley has argued, that ‘Market Garden’ was a conceptual failure rather than a morale one. Morale would also appear to have been mostly high during operations in the Low Countries and Germany, but these operations were beset with setbacks and delays.

One of the key advantages of the quantitative assessment of morale presented here is that it allows the relationship between levels of morale and combat effectiveness to be quantitatively evaluated. Because the ‘Colossal Cracks’ operational approach employed by Second Army was essentially attrition based, an assessment of German casualties would be an excellent proxy for combat effectiveness. However, while such figures are available in ten day periods for the German Army as a whole, they do not differentiate between casualties inflicted by Allied nationality e.g. British, Canadian or American, making an accurate assessment of Second Army’s effectiveness on this basis problematic. As the number of enemy prisoners captured by Second Army per week is available, it may be used as a crude but useful alternative proxy for combat success. Once the numbers are crunched, we find that there was a weak negative correlation between the level of morale in each week of the campaign and the number of enemy prisoners captured per week.

So, how can we explain Second Army’s success in Northwest Europe? Any suggestion that Second Army’s combat performance was the product primarily of the application of overwhelming firepower appears to be undermined also by the available evidence. Army Operational Research Group Memorandum No. E20, ‘Some Statistics on the North West Europe Campaign’, clearly states that there ‘was no significant correlation between German casualties and either Allied [Anglo-Canadian 21st Army Group and US 12th Army Group] casualties or Allied ammunition expenditure’. Furthermore, there was not a strong relationship between the firepower employed by 21st Army Group, of which Second Army was a key component, and the area of ground captured from the enemy (again, a crude but useful proxy for combat success). In fact, there was a similarly weak correlation between the firepower employed by 21st Army Group and the number of enemy prisoners captured.

Furthermore, any suggestion that the performance of Second Army was driven primarily by conceptual considerations appears to be ill founded. David French, Stephen Hart, and Stephen Biddle have all argued that Montgomery employed a systematic, or even formulaic, approach to battle in the Northwest Europe campaign. However, both theoretically and practically, there are limits to the effectiveness of systematic approaches to battle. Both Buckley and Terry Copp have argued that by 1944, German tactics had become so predictable that the Allies were able to devise their own strategies around them. The same can be said for the British approach. By 1944, the Germans were fully aware, for example, that the direction of creeping barrages indicated the thrust lines of impending advances. This made it easy for the Wehrmacht to place reserves at the decisive point at the key moment. Normandy did not go exactly according to plan; no military plan ever survives first contact with the enemy unchanged. In fact, as Buckley and Copp have intimated, the Northwest Europe campaign was characterised far more by adaptation and innovation than heretofore recognised. It can be argued, therefore, that British success was not built primarily on an operational, or conceptual, approach to the problem (however much this may have helped), but rather on the ability of individuals (including Montgomery) and units at every level of the military organisation to balance the available means (be they material, tactical or morale) with the objectives and ends at hand, as indeed they did over the course of the successful campaign. This interactive, dynamic process required a nuanced, flexible and strategic approach to combat performance – a challenge I explore in a recent chapter in Anthony King’s new edited collection, Frontline: Combat and Cohesion in the Twenty-First Century (Oxford: Oxford University Press, 2015). An earlier version of this article can be found here.

Image: General Montgomery stops his car to chat to troops during a tour of 1st Corps area near Caen, 11 July 1944, courtesy of The Imperial War Museum (photo B 6934).