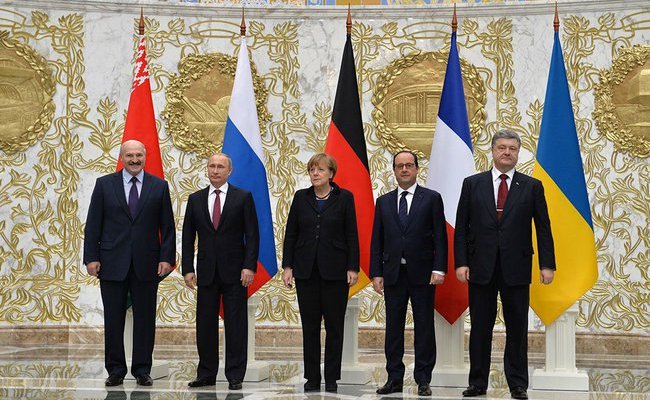 Last Friday, the leaders of Ukraine, Russia, Germany and France met in Paris, ostensibly to discuss the ongoing crisis in eastern Ukraine. But the talks there were dominated instead by developing events in Syria. With European eyes focused on the Middle East, the conflict in Ukraine risks becoming a forgotten war. This is problematic – the fighting in the east is imposing severe costs on Ukraine that may have profound implications for the country’s fledgling democracy.

For Ukraine, the most obvious and painful costs of its civil war are the human costs. The conflict in the east has resulted in the death of almost eight thousand Ukrainian civilians and up to 1.4 million have been displaced from the conflict zone. In addition, well over two thousand Ukrainian service personnel have lost their lives and almost seven thousand have been injured. Despite the western tendency to view the war in Ukraine as a low intensity conflict, some of the combat there has been vicious. In one particular battle in Ilovaisk in August 2014, 366 Ukrainian soldiers lost their lives providing a stark reminder of the often ferocious nature of the fighting.

In a speech to the UN summit in New York, the Ukrainian President, Petro Poroshenko, also spelled out the high economic costs of the conflict, which had contributed significantly to a slump in the Ukrainian economy. He estimated that the war was costing Ukraine $5million a day and that fighting in the east has resulted in the loss of about one fifth of Ukraine’s economic potential. Despite the recent restructuring of Ukraine’s debts and some tentative positive signs that Ukraine’s economic slump had slowed and that its currency is rallying against the dollar, Ukraine’s economy ‘remains in dire straits.’ From May 2014 to May 2015, Ukraine’s GDP shrank by 17.6%.

An additional, albeit indirect cost, of the conflict in the east is that it has made military reform in Ukraine much harder and created some new challenges to building an effective fighting force. The decision taken by the Ukrainian government to increase rapidly the size of the armed forces will impact on Ukraine’s future military reform. In August the government introduced the sixth and last wave of mobilisation, and, although it only managed to recruit 60% of its target, this increased the overall size of the Ukrainian armed forces (UAF) to 250 thousand. For the Ukrainian government mass matters. A large military sends a very clear deterrent message to the Russian government and demonstrates to the West its commitment to defending its territory. Mass, at least in theory, should also give the UAF resilience, flexibility and the ability to hold territory. The rapid increase in the size of the UAF is, however, likely to put further strain on the overstretched Ukrainian defence budget by further increasing the costs of maintaining such a large force. In 2014, despite an increase of 25% on the defence budget from the previous year, the Ukrainian government spent more than 80% of the defence budget on maintaining the armed forces and as a result has lacked the finances to develop the UAF. In light of the significant increase in the size of the UAF and the costs associated with its maintenance, the Ukrainian government will therefore struggle to attain its goal of building a modern European-like military in the near future.

But perhaps the most profound cost has been the progressive destabilisation of Ukraine’s democratic system. The ongoing conflict in the east has threatened the fragile pro-government majority in the Ukrainian parliament, the Rada, and in consequence its ability to deliver both the constitutional changes mandated under the Minsk II peace agreement signed in February, and far reaching and long overdue political and economic reform of the Ukrainian state. For example, in relation to the former, the introduction of constitutional changes which would grant greater autonomy to the separatists in the east of Ukraine, faced strong opposition in parliament in August and were rejected by three of the government’s coalition allies, splintering the governing coalition. Over the last few weeks the pro-government coalition has been further weakened by the departure of one of the smaller coalition partners, the Radical Party, raising concerns that the government will be unable to mobilise the votes necessary for the future approval of legislation granting special status for parts of Donetsk and Lugansk. As well as undermining the Minsk II peace agreement, there is also concern that the lack of a pro-government working majority in the Rada will not only hamper the introduction of important legislation, but could also lead to the early dissolution of parliament. The growing polarisation of Ukrainian politics is illustrated by a recent incident in Kyiv during a rally against the constitutional changes by Ukrainian nationalists, in which a right wing protester threw a grenade, which killed three National Guardsmen and injured 141.

The civil war is also undermining civil-military relations in Ukraine, especially as a result of the rising prominence of volunteer militias. The arrest of Ihor Humeniuk, a war veteran and a member of the Interior Ministry’s volunteer Sich Battalion, for the grenade attack noted above, has been seen as a clear indication of the growing militarisation of Ukrainian politics. Approximately 50 volunteer battalions have played a role in Ukraine’s territorial defence in the east. The emergence of these often well-funded volunteer units has challenged what Max Weber would describe as the Ukrainian government’s ability to exercise a monopoly on legitimate violence. Many of these battalions are funded by and answerable to local oligarchs, not the government. The Azov battalion, for instance, is funded by the governor of Donetsk region the oligarch Serhiy Taruta. But there are also growing links between political parties and volunteer military units. For example, the Svoboda Nationalist Party has links to the Sich Battalion, and Prime Minster Arseniy Yatsenyuk’s People’s Front Party has connections with the Dnipro-1 Battalion. Two of the commanders of the Aidar Battalion, one of the most visible and notorious volunteer fighting units, were members of the Ukrainian parliament.

There have been growing concerns about the behaviour of many of these volunteer battalions, and the Ukrainian government’s ability to control them. Although many of these battalions have been absorbed into the Interior Ministry, they risk damaging Ukraine’s international reputation. Last year Amnesty International accused the Aidar Battalion of ‘widespread abuses including abduction, unlawful detention, ill treatment, theft, extortion and possible execution’ during its deployment in Donetsk and Lugansk. In response, the government disbanded the Aidar battalion, but, in a show of force, they staged a violent protest outside the Defence Ministry. Indeed, in light of international concerns about the professionalism of many of the volunteer battalions, the US House of Representatives has banned the US from training and arming members of the Azov battalion.

There is no doubt that the ongoing conflict in Ukraine has already imposed considerable costs on the Ukrainian people. However, if the conflict is allowed to continue, it may also have profoundly negative consequences for the development of Ukraine’s democracy.

Image: Leaders of Belarus, Russia, Germany, France, and Ukraine at the summit in Minsk, 11–12 February 2015, via Wikimedia Commons.