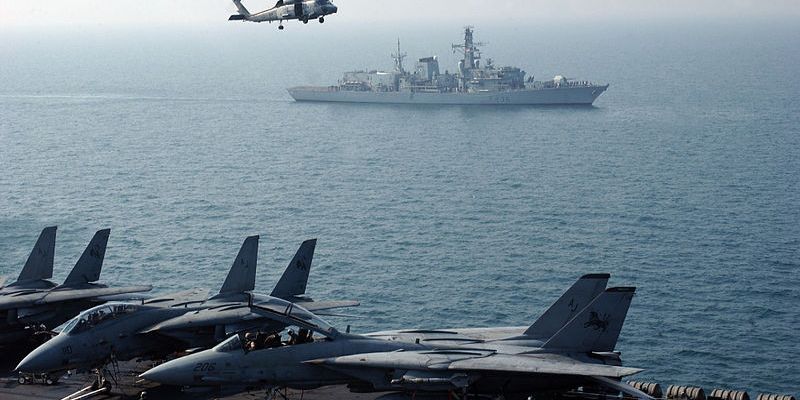 On 1 November 2015, the UK Foreign Secretary Phillip Hammond inaugurated the beginning of works constructing the UK’s first permanent military base in Bahrain in the Persian Gulf since 1971 when the UK withdrew from the region. Using language that almost seemed to deliberately hark back to Britain’s colonial days in the Persian Gulf, Hammond announced that “The presence of the Royal Navy in Bahrain is guaranteed into the future, ensuring Britain’s sustained presence east of Suez.”

In reality, the Royal Navy has scarcely left the Persian Gulf region in the last century, and this ‘new’ base is better seen as the renovation and expansion of existing structures. Nevertheless, the fanfare surrounding the announcement of the new permanence of the UK presence is interesting and indicative of the current UK Government’s perspective. Indeed, the timing of the turning of the soil on this ‘new’ base comes between the hosting of the Chinese President for a lavish, extended state visit in October and the hosting in early November of Egyptian President Sisi. David Cameron’s government plainly believes in the importance of international engagement with states that many accuse of a range of human rights abuses.

The government marshals a variety of arguments to defend its engagement with such states, many of which have roots in the UK’s National Security Strategy (NSS), the key document that seeks to outline the UK’s national interest and how it can be defended.

The government argues that the UK’s security is protected by maintaining and developing these kinds of links. In terms of the military, the UK provides a range of key training roles for counterparts in the Gulf region, while regional bases provide an important change of arena for UK troops. Moreover, given the salience of the region to the wider world economy and the number of conflicts that have plagued the region in recent decades, developing military to-military links in the Gulf area are deemed to be important. As the former Chief of the UK Defence Staff put it, ‘if we are to influence, we must know what drives our friends and how to motivate. This is not something that can be done on the eve of an operation.’ There are also direct intelligence links with, for example, Saudi Arabia that have proved to be crucial in thwarting at least one serious terrorist attack on UK soil.

The UK is highly dependent upon the Persian Gulf region for trade. Bilateral trade with the region is increasing quickly to around £30bn per annum, which is more than to India, Russia, and Mexico combined. Most governments would likely deem it inadvisable to shun such countries where trade is so important.

Some charge that there is a flat contradiction between the UK’s desire to trade with these states and other important goals of the state’s NSS, namely the promotion of British values and influence. It is not difficult to imagine ministers avoiding criticising murkier issues related to human rights in the wider effort to win a particular contract.

Similarly, the UK government is open to the charge that however many links are established between governments or in industry, and no matter the theoretical opportunities created to allow the promotion of British values and culture, the reality remains that little seems to ultimately change.

Both charges are difficult to answer. Individual examples of international pressure forcing, for example, Saudi Arabia to reverse a particularly egregious travesty of justice can be found, but the system remains the same. Which makes it all the more puzzling as to why the British government eventually chose to make a stand with Saudi Arabia over a contract to consult on Saudi Arabia’s prison system. This £5.9m contract was cancelled in mid-October because of wider human rights concerns. Principled though this may be, it would seem to be logical that anyone in the UK government or otherwise interested in spreading British values would seek to exert influence in Saudi Arabia’s prison system as a matter of priority. The narrative of building contacts and influence is effectively aimed at opening the door for just such opportunities to share expertise and best practice. This confusion is an inevitable by-product of the nature of modern British politics and the subjective, inconclusive arguments put forth by those supporting and opposing engagement.

The argument is inevitably more difficult for those against engagement. For they must move beyond rowdy, faux-principled rejectionism and actually make a case for how, for example, the Saudi prison system will reform better now that the UK role therein is finished. Perhaps another western liberal democracy will take up the contact, perhaps not. And those seeking greater engagement need to move beyond platitudes and seek concrete, direct, and ideally verifiable examples of UK influence leading to a change in policy.

3 thoughts on “UK in the Gulf: to Engage or not to engage?”