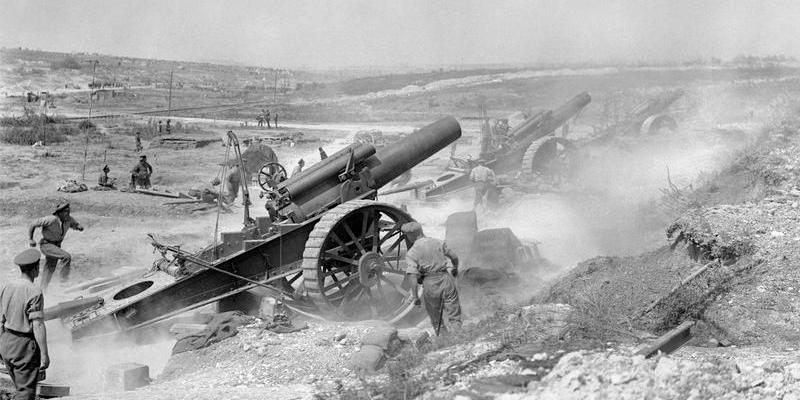 This is the first in a series of posts by members of the First World War Research Group and select guest contributors to mark the centenary of the Battle of the Somme.

Robin Prior is Visiting Professorial Fellow at the School of History and Politics at the University of Adelaide. He is the author of six books on the first world war, including Gallipoli: the End of the Myth and (with Trevor Wilson) The Somme.

The Battle of the Somme is to be remembered or commemorated but hardly celebrated on its hundredth anniversary this year. The battle has a number of distinctive features – few of them pleasant. It was the largest battle, in number of troops committed, ever fought, or likely to be fought by the British army; it also was the most costly in terms of casualties; and in terms of dead and wounded it contains the very worst day in British military history with 57,000 casualties – 19,000 of them dead – on the first day of battle 1 July 1916.

The decision for a large battle in the summer of 1916 was made by the allied planners at the Chantilly Conference in December 1915. Russia and Italy were to make contributions, but on the Western front it was to be a joint Franco-British affair to take place where their armies joined around the River Somme in Picardy. The German offensive at Verdun rather dented this conception as French troops were repeatedly drawn from the Somme area to prop up the sagging French line further south.

The British Commander-in-Chief, Sir Douglas Haig, was aware of this movement but apart from taking over a section of front that was to have been assaulted by the French, did not let the new circumstances affect his planning. In attacking the German positions on the Somme he essentially had two options. He could adopt the plan of the Army Commander General Rawlinson, who would carry out the attack, and concentrate their artillery resources against the German front system of trenches. When this had been flattened and captured they would drag the guns forward and attack the second enemy line in similar fashion. The aim of this plan was to kill Germans rather than gain ground.

But Haig had his own conception. In this plan he would bombard the three German lines facing him and flatten them all. The cavalry would then be free to sweep over the enemy defensive position, head towards Bapaume and then turn north and roll up the entire German front. The aim of this plan was either to win the war at a blow or to force a substantial withdrawal of enemy forces from occupied France and Belgium.

Haig considered the Rawlinson variation but soon adopted his own scheme. He had an unprecedented number of guns and considered that with a long bombardment he could achieve his aim of unleashing the cavalry and overwhelming the entire German position. Two issues were ignored by this decision. The first was that despite the massive fire-power at his disposal, his artillerymen faced an enormous problem. The Germans, over a period of 18 months, had converted a system of defended lines into a series of much more complex defensive positions. Thus behind the front line of their first and second system lay a maze of inter-connected trenches, all with deep dug-outs. Haig’s artillery therefore were required to neutralise entire areas, especially in the two front systems but to some extent in the third and most distant system as well. For this the British needed heavy guns of at least 8” calibre and above. Yet the overwhelming proportion of British guns were not heavy, merely 18 pounder field pieces and 4.5” howitzers. The Germans had also concentrated many batteries of guns some miles behind their front, yet Haig was woefully short of counter battery guns with which to neutralise them.

The second issue that was hardly even considered was that should a miracle occur and the German defensive positions collapse, would the cavalry be able to navigate a path through a maze of trenches, littered with shell holes, barbed wire entanglements and all the detritus of a modern battlefield?

These two issues lie at the heart of the disaster that was the first day of the Somme. By merely assuming that his artillery was of sufficient number and of appropriate calibre for the task instead of undertaking the necessary calculations, Haig doomed his soldiers to destruction. The most elementary arithmetic would have revealed that he had sufficient fire-power only to subdue the front system. By attempting to destroy all three trench systems Haig managed to destroy none, leaving German machine gunners undisturbed and free to fire at the troops advancing across no-man’s-land or indeed merely trying to get forward to their own front line. Those troops who were not cut down by this fire fell victim to the un-attacked distant German artillery pieces that were able to land a fury of shells across the areas where the British infantry were trying to advance.

The cavalry aspect of the first day of battle is often deemed irrelevant because no cavalry were committed that day. But It was Haig’s insistence on attempting to push through the cavalry that spread the artillery fire fatally thin. And this was doubly obtuse because the sombre fact was that the cavalry had long ceased to be an arm that could exist (for very long anyway) on a modern battlefield. Horsed-soldiers were such easy targets for those enemy machine gunners who survived even the most intense bombardments on the Western Front that they must soon be shot down. And the entanglements through which they had to manoeuvre, meant that the pace of any fortuitous advance must be slow which made the horses that much easier to shoot. The type of war Haig might have liked to fight was one thing. The type of war he was confronted with quite another.

So the first day of the Somme was catastrophic for Rawlinson’s Fourth Army, almost 50% of which were casualties by day’s end. Ah, but observers say: the Somme battle continued until mid-November; the whole operation must be considered. Let us then consider it. After the first day, apart from one attempt at a considered broad front attack (14 July) the battle for the next two months descended into a welter of un-coordinated, narrow-front operations in which small numbers of troops attempted to capture the German trenches in front of them while being pounded by unsubdued machine gun and artillery fire. The results were so meagre that the ground gained in this period can only be clearly represented on a large scale map. Haig and Rawlinson presided over rather than directed this shambles. In August Haig seemed to grasp that some consideration should be brought to bear on the methods being employed by Rawlinson but when Rawlinson ignored his strictures, the commander-in-chief lapsed into incomprehensible silence.

While the command slumbered, the troops suffered. Repeated attacks were made against strongpoints in the German line such as Mouquet Farm, High Wood, Delville Wood, Ginchy, Guillemont and others. Probably the feeble yet frequent attacks against High Wood alone cost 100,000 casualties. Overall, in terms of the percentage of casualties suffered (50%) this period bears direct comparison with the first day. In short, looking at the battle in depth does not improve the view.

For a brief moment in September the prospects of the British improved. On the 15th Haig incorporated a new weapon into the battle in the form of tanks. About 50 of the Mark I monsters were used to some effect near Flers and the unsuspecting Germans sensibly fled. Some ground was gained. Then, just 10 days later, a broad-front, well planned blow was struck in the same area, this time without tanks. The Germans were pushed further back, the British gaining more ground in these two episodes than in the whole period from 1 July. Haig’s armies now stood at the edge of an extensive, low-lying area of the battlefield. It was late in the campaigning season. The French had recovered at Verdun. The battle could be halted on a winning note.

It was not halted. Instead Haig concentrated his cavalry once more. This time he was aiming for Arras, some 70 miles away, completely disregarding the fact that it had taken him three months to capture just 6 or seven miles of ground. The result was another disaster. On 9 October the troops set off in rain and mud. The important innovation in infantry protection that Haig had developed at the Somme, the creeping barrage of shells fired immediately in front of the attackers, was useless in the mire when troops could not keep pace with even the slowest barrage. Rain, fog and low cloud rendered the aircraft spotting for the artillery useless and therefore also rendered the protection the guns were trying to provide useless. The operation was called off. The enemy front was hardly in sight, let alone Arras.

In these dismal conditions operations continued for another 6 weeks. The gains made were derisory and tactically bereft as the troops were advancing into a swamp. Finally, major operations were halted in mid-November. The battle had cost the British some 400,000 casualties. The Germans certainly suffered –some 230,000 becoming casualties. In general the enemy was appalled at the tenacity of the once-insignificant British army. But the army that suffered most was the British. And this battle was not part of some grand conception on the part of Haig to wear down the enemy one battle at a time. As noted, it was designed to win the war. The ‘one continuous battle’ justification offered for the Somme is guff, thought up by Haig after the fact to disguise the incompetent way he had fought this particular battle. One hundred years later we must look at the Somme not as a bloody victory or indeed any kind of victory. It was a dire defeat and perhaps the nadir of British command on the Western Front.

Image: Three 8 inch howitzers of 39th Siege Battery, Royal Garrison Artillery (RGA), firing from the Fricourt-Mametz Valley during the Battle of the Somme, August 1916, via the Imperial War Museum.

One thought on “THE SOMME- The British Battle”