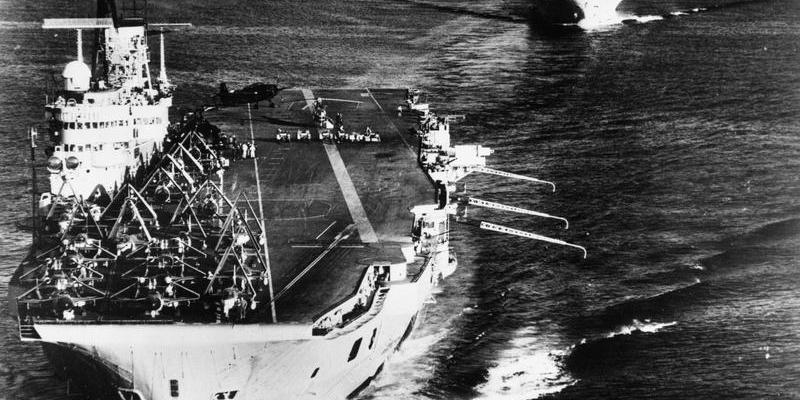 This is the second in a series of posts drawn from an event to mark the 60th anniversary of the Suez Crisis which the Defence Studies Department Strategy and Defence Policy Research Centre hosted on November 7th, 2016. Recordings of the papers will be posted shortly to the Department soundcloud.

The Suez conflict provided many salutary lessons for British strategy and defence policy. The majority of these emerged from political, diplomatic and military failings associated with what was by common consensus the worst debacle in British foreign policy between 1945 and, perhaps, the 2003 invasion of Iraq. Essentially, it provided a long list of things not to do, errors to avoid. However, some of the conclusions drawn were more positive, not least for Britain’s naval forces. The Suez crisis occurred at a critical point in an on-going debate over the role and capabilities of the Royal Navy, facilitating the emergence of a viable and important future role. In doing so, it resolved – for a time at least – a bitter and high-stakes dispute over the value of naval power in general and naval aviation in particular.

Since the early 1950s, the role of the Royal Navy and even of sea power more broadly had come under concerted attack in Whitehall. The Air Ministry pushed hard for a narrow focus on the early, nuclear stage of a total war with the USSR – for which, as it happened, the RAF’s cherished medium bomber force was well suited. This approach left little room for naval power; why seek to defend sea communications when the war would be settled quickly, by nuclear weapons? Some senior politicians and civil servants were convinced of the strategic logic of this case, while others went along with an approach that appeared to offer significant savings in defence spending. The Admiralty put up a spirited counter-case arguing that defence policy could not plan only for total war, let alone for only one form that such a war might take. Conventional forces, it insisted, including naval power, were an indispensable part of the deterrent to war; they would be essential to fighting any war if Britain was to survive; and they were vital for waging the cold war, which was bound to continue and even intensify as total war became less likely. The strategic logic of the Admiralty case was compelling but the financial implications were unpalatable; the Navy held on but only just and the assaults kept coming. Suez provided a much needed reality check.

First, it was a reminder that while deterring or fighting total war with the Soviet Union was bound to be the main focus for policy, it was not the only game in town. Britain and the West more broadly had interests around the world that were important in their own right, as well as having a potential connection to the cold war. Indeed, with a deliberate resort to war by the USSR being viewed as unlikely, preventing the outbreak of minor conflicts that could escalate became an important element of avoiding war. The Suez crisis both demonstrated the need for military intervention overseas and also shed a harsh light on existing British capabilities for such operations.

The second question concerned how such intervention should be conducted. Britain had hitherto relied on garrisons stationed overseas and on the use of air bases. These were expensive to maintain and as pillars of a strategy for intervention, they were being increasingly shaken by nationalism and decolonisation, resulting in the loss of bases or tight restrictions on their use. A potential ‘air barrier’ across the Middle East further complicated the British response to any crisis in the Gulf, Indian Ocean or Far East, reducing the utility of any UK-based strategic reserve. In response to these developments, the Admiralty was beginning to propose that the Royal Navy could take the lead ‘east of Suez’ with maritime task forces, based around carrier air power and amphibious capabilities, which would provide a stabilizing influence and a capacity for intervention. This vision appealed to those wanting a cheaper strategy as well as accommodating the reality of reducing access to overseas bases. It suited the Air Ministry which, focused on nuclear-armed bombers, was entirely content to see conventional, expeditionary air power fall primarily to the Fleet Air Arm. It also gave the Royal Navy a clear and viable role which attracted wider political support – at the same time as preserving capabilities that the Admiralty continued to see as essential for total war; hot war was de-emphasised in favour of warm and cold war.

This concept was circulating and gaining some support before the Suez crisis; the lessons of the intervention greatly strengthened the case for it. Previous British planning had rested on the wealth of air bases in the region, yet in the event Libya, Iraq and Jordan had denied the use of these to Britain. The Anglo-French force could only use Malta, from which only medium bombers could reach Suez, and overcrowded and potentially vulnerable bases on Cyprus. From the outset, it was obvious that the operation would have to depend heavily on carrier-based air power. The force deployed included the fleet carrier HMS Eagle and the light fleet carriers HMS Bulwark and Albion (rushed out of refit) plus the French Arromanches and Lafayette. These carriers provided over 60 per cent of the fighter-bombers for the operation (which proved more effective than the medium bombers), and carrier-based aircraft contributed over 65 per cent of the ground attack sorties. Their involvement was vital to gaining air superiority – even the Air Ministry accepted that Fleet Air Arm aircraft destroyed the majority of enemy aircraft – and to supporting the airborne and amphibious landings and the campaign on land that followed.

This striking vindication of the utility of carrier-based air power caused considerable discomfort to those in the Air Ministry who had devoted so much effort over the previous years to dismissing its utility. (While things have improved hugely in this area since the 1950s, there are still some echoes of this sentiment today: the history timeline on the RAF web site (http://www.raf.mod.uk/history/rafhistorytimeline195059.cfm)

says of Suez, ‘RAF Canberra and Valiant bombers flying from Malta and Cyprus, in conjunction with French Air Force aircraft, attack twelve airfields in the Canal Zone. Airfield attacks continued until 4 November, by which time the Egyptian Air Force had been decimated.’ The overlooking of carrier-based aircraft is rather glaring.)

One particularly positive development at Suez was a major innovation in amphibious warfare. In addition to conventional parachute drops and amphibious landings from the sea, the operation saw the first ever helicopter assault, when 45 Commando Royal Marines was landed by a joint helicopter force operating from the converted light carriers HMS Ocean and Theseus. This brilliant improvisation by a rather cobbled together force indicated the way forward for amphibious operations.

The Suez experience vindicated the maritime task force concept, with both carrier strike and amphibious forces demonstrating their utility. As a result, the 1957 defence review made presence and limited intervention east of Suez the core role of the Royal Navy. That this review was overseen by Duncan Sandys, the most bitter ministerial critic of naval aviation in the postwar era, makes the result all the more striking. The existing carriers would be retained and modernised, with a new carrier ordered in 1963. Britain’s amphibious forces were strengthened by the conversion of Albion and Bulwark to commando carriers, and by the order of two new amphibious assault ships, Fearless and Intrepid (which would form the core of the amphibious force in the Falklands War).

This new approach, in which maritime task forces acted as a stabilising presence and, if necessary, the spearhead of a joint intervention force, was repeatedly proved during the late-1950s and early 1960s. As the UK now looks once more to expeditionary operations, having escaped the strategic blind alley of continental garrisoning, these lessons of Suez again have relevance.

2 thoughts on “SUEZ SIXTY YEARS ON: IMPLICATIONS FOR THE ROYAL NAVY”