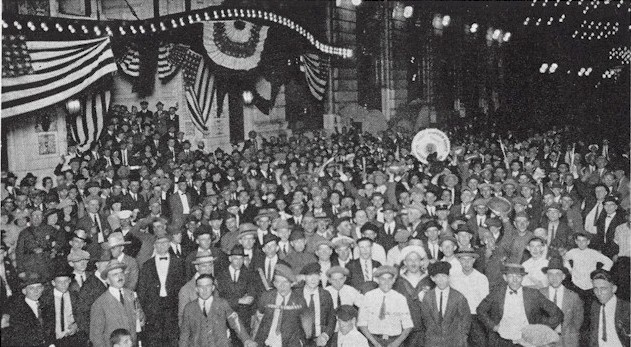 Ashely is a DPhil student in the Globalizing & Localising the Great War programme at the University of Oxford. You can here a recording of the talk associated with this post here.

The year 2017 marks the centenary of American involvement in the First World War, but it is unlikely to draw the same level of public attention as the 2014 anniversary has in Britain. The Great War does not hold such prominence in the American national consciousness, a reality which is often attributed to its more limited role in the conflict. The United States entered the war three years into the fighting and lost approximately 53,400 men killed in combat (although including influenza deaths among servicemen raises the tally of American dead to more than 115,000). Britain, by comparison, suffered more than 700,000 dead during the conflict. It could be argued that such figures explain why the First World War has receded in American public memory while it retains such prominence in Britain, but it is significant to note that this was not the case in the years immediately following the war. As scholars such as Jennifer Keene, G. Kurt Piehler, Mark Snell, and Stephen Trout have argued, the war left a considerable mark upon America and a culture of commemoration developed in the post-war years just as it did in Britain and other former belligerents. So when – and how – did these memory trajectories come to diverge so markedly?

Naturally, our thoughts turn to subsequent historical developments for this answer, and particularly to the Second World War, which is the predominant twentieth-century war remembered in the United States. How this latter conflict came to affect the memory of its predecessor is an intriguing question into which ex-servicemen’s organisations such as the British and American Legions can provide unique insights.

The Legions’ shared characteristics provide a baseline for comparison that may help illuminate the unique national contexts in which they were situated. The membership, leadership, structure, and relationship to the state of both groups mirrored one another – as prior work by Niall Barr, Graham Wootton, William Pencak, Thomas Rumer, and Stephen Ortiz has demonstrated. Former officers and the upper classes were over-represented among the national leaderships of both groups, while white middle-class men of small towns dominated the rank-and-file membership. Hierarchically structured with local, regional, and national outposts, both groups enjoyed close working relationships with their respective states, thanks to conservative political agendas. Perhaps the most significant similarity, however, is their common mission to perpetuate the memory of the First World War. This agenda came to inform their political and cultural engagements in Britain and America throughout the interwar period.

Yet despite the similarities in demographic and cultural terms, and the shared background and aims of these groups, in-depth research comparing the two is lacking. This is due in part to the differing national contexts mentioned earlier, but also because of important distinctions between the organisations themselves. The American Legion was considerably larger and more powerful politically than its British counterpart, claiming between 15-25% of all Americans mobilised for World War I as members and enjoying support from political elites such as Theodore Roosevelt, Jr. The British Legion, in contrast, represented 10% of British veterans at most during its interwar peak. Its national presence was felt more through its annual Poppy Day appeal rather than its influence on official policies.

Yet these differences only make the question of divergent memory trajectories even more pronounced, since it is in the United States – with its larger and more politically influential Legion – where the memory of the Great War subsides most. Perhaps the answer can be found in the differing national experiences of the Second World War?

That the Second World War delivered a blow to such groups so firmly anchored in the Great War is unsurprising. The onset of another global conflict forced both organisations to re-evaluate the legacy of the preceding war. Comparing the First World War with the Second thus became a frequent theme in British and American Legion discourses – especially early on in each nation’s war effort. Placing Great War veterans in relation to those being mobilised for the new fight was particularly important for the groups, whose membership rolls might increase via these future ex-servicemen later on.

At the heart of wartime discussion was a debate about comradeship – which my paper to the First World War Research Group at the Joint Services Command and Staff College on 14 February 2017 (available here) analysed in detail. Participation in the First World War served as a cornerstone in the collective identities of the British and the American Legions. Incorporating ex-servicemen who had not experienced the Great War challenged existing ideas of who could be considered a “comrade in arms.” Deviating too far from past views might jeopardise the memory of the First World War, both in terms of upholding its broader historical significance and as well as its personal import. At the same time, recruiting Second World War ex-servicemen offered the chance to secure their futures as organisations. Discussions, therefore, needed to appeal to this generation, too.

Deciding who belonged and who did not boiled down to a much larger question with significant implications: why did the service of veterans from both the First and Second World Wars matter?

Examining discussions among Great War ex-servicemen in America and Britain offers a helpful case study demonstrating how the Second World War impacted narratives of the First within these differing national contexts. The extent to which the Legions continued to uphold the Great War as significant raises interesting questions about wider developments in national memory discourses. Understanding the conflict’s place in British or American national consciousness in 2017 is not only a matter of grasping these state’s respective war experiences, but of discovering how subsequent events served to shape its narratives as well.

Image: Crowd at an American Legion convention in New Orleans, 1922, via wikimedia commons.