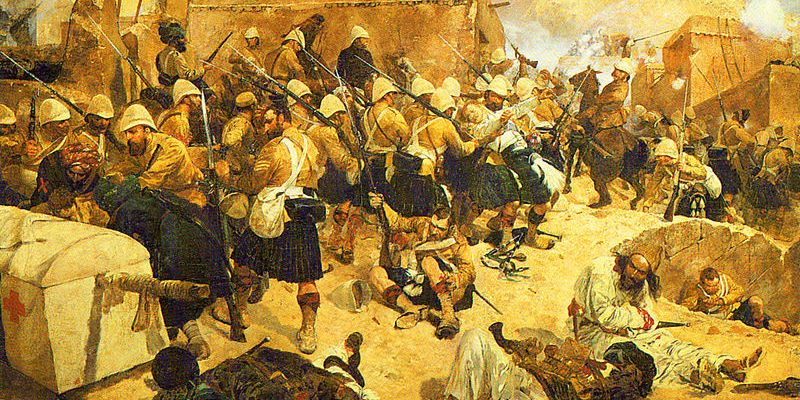 This post builds upon an earlier debate on the politics of Britain’s military history and the state of modern military history. It re-frames that discussion in relation to a powerful recent critique of aspects of ‘military history’ in the History Workshop Journal, which will be expanded upon in a forthcoming article for the British Journal of Military History. Dr Matthew Ford is a Senior Lecturer in International Relations at the University of Sussex and founding editor of the British Journal of Military History. His latest book, Weapon of Choice: Small Arms and the Culture of Military Innovation was published by Hurst & OUP in 2017.

Following the EU referendum, Britain is once again seeking to redefine its role in the world. Public discussions have sought to re-frame the UK as a global, outward looking country, drawing on an apparently benign imperial past. This has produced something of a schism between those who support claims about Britain’s historic civilising mission and those who question the idea that the British Empire is a suitable model for orientating a debate concerned with the future.

By pointing out the inadequacies in the way Britain’s armed forces are represented in its military history, however, there is a danger that critical scholars undermine their ability to engage in the public debate. Survey data shows that the public’s understanding of the military is limited, partly because Britain’s armed forces are at their smallest in centuries. This isn’t to say that interest in the armed forces is low but it does point to a gap in the shared social experiences between society and the services. One of the main routes for bridging this civil-military gap is through military history.

Unfortunately, however, despite its importance for framing the public debate, military history has long been ridiculed by ‘proper’ historians. Perceived as socially and intellectually conservative, military historians often reside in military academies where they must teach an overly militarised and misrepresentative form of history. Military historians, it is held, focus their attention on the details of operational technique, of tactics and technology. They are thus seen as unwilling to apply theory and progressive methodologies and, as a result, propagate a form of drum and trumpet nationalism. In this way, they fail to ask the tough ‘why’ questions that, for instance, examine why some social groups are privileged even as others become the targets of violence.

Caricatured in this way, military historians thus occupy a cultural space at odds with a prevailing academic logic that has emerged from and been enabled by Britain’s membership of the European Union. With one in six of British academics originating from the EU, University life has become even further de-nationalised. The result is a cultural context in which scholars have been free to ask challenging questions and recover narratives in ways that previously would have been unthinkable. Set against this backdrop military history is understandably seen as anachronistic.

The problem for critical scholars, however, is that if they truly seek to recast a public narrative of Britain’s military past along progressive lines, then almost certainly they will need to get involved in military history. Publishers and popular historians well understand the public appeal of books about war. Dismissing this reality and criticising from the sidelines does nothing to re-shape public understanding but merely cedes ground to those with more conservative dispositions.

Only by taking our responsibility as public intellectuals seriously can critical scholars stand some chance of framing an interpretation of Britain’s military history in more progressive ways. Such an effort would have the beneficial side effect of demilitarising military history.

6 thoughts on “Towards De-Militarising Military History”