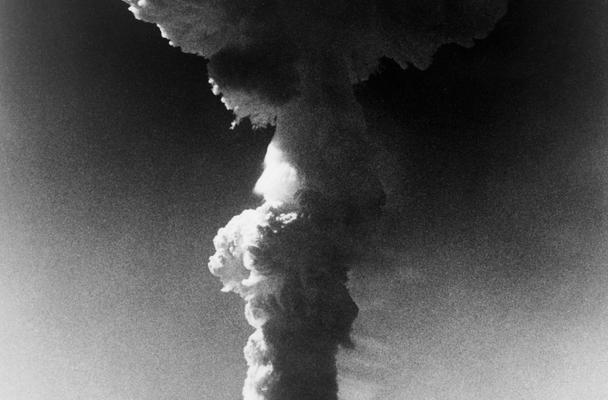 The British Army was remarkably quick in getting to grips with the conceptual challenges posed by the arrival of nuclear weapons, with a rich body of theoretical literature emerging in service journals during the 1950s. The basic tactical problem identified was that mass would suffer most on a nuclear battlefield – nuclear weapons are, after all, weapons of mass destruction. This meant that new techniques would have to be found which would allow ground forces to exploit the power of nuclear strikes, but avoid their effects. In trying to conceptualise this problem many theorists took as their reference points the great land campaigns of the Second World War and imagined how they would have progressed under atomic conditions. Common examples included: the allied landings at Normandy in 1944, British concentrations during the 1942 battle of El Alamein, and the allied crossing of the Rhine in 1945 (engineers were quick to stress that 21stArmy Group alone built 1,455 bailey bridges between June 1944 and May 1945). What these examples appeared to show was that such heavy troop concentrations would make favourable targets in a future war, and should be avoided at all costs.

This realisation raised further problems, however, since the concentration of force had hitherto been an important positive factor in war. The principle of ‘Concentration’ became codified in official British military doctrine with the publication of the 1920 Field Service Regulations and has remained there ever since. If mass would suffer most on the atomic battlefield then this implied that armies would need to be able to switch rapidly between concentration and dispersion. By so doing, ground forces could concentrate in time but not in space, denying the enemy a suitable target for nuclear attack. The phrase ‘concentrate to fight, disperse to live’ was extremely popular and became the watchword for military theorists throughout the 1950s.

Dispersion was not a new technique for atomic age military planners but had become, by the 1950s, a necessary battlefield technique in land warfare to circumvent the increased range, accuracy, and lethality of firepower. This would become even more important in nuclear land combat where the arrival of powerful and ubiquitous nuclear weapons systems suggested that battlefields would become much larger and fixed fronts may give place to large areas of mobile fighting by small, fast columns.

Thinking about the impact that increases in the lethality of firepower would have on the battlefield was not unique to the atomic theorists and has taxed the imaginations of military intellectuals throughout history. J. F. C. Fuller argued in The Foundations of the Science of Warthat, historically, when the three elements of combat – firepower, protection, and mobility – were balanced equally, tactics flourished, but when that balance became too heavily weighted in favour of one element over the others, ‘the art of war has either stood still or retrogressed’.

Since the atomic bomb represented mankind’s absolute mastery of firepower, the tactical pendulum appeared to have swung decisively in favour of firepower over mobility. The Czechoslovak army officer Lieutenant Colonel F. O. Miksche illustrated this problem vividly in his 1955 study of modern armies: ‘As a result of the invention of atomic weapons, fire-power increased a thousand-fold. At the same time, the means of movement on the ground remain unchanged – lorries and tanks are used as in the last war’.

If atomic age armies hoped to be able switch rapidly between concentration and dispersion then this would require high levels of tactical mobility, and this became the second major debate to emerge within the pages of service journals during the 1950s.

Tankers were quick to seize the opportunity to promote their branch over other sections of the service. In a 1953 article in the Royal Armoured Corps Journal, the inter-war pioneer of mechanised warfare in Britain, Major General J. F. C. Fuller, argued that the tank would become much more important in a future ground war involving the tactical application of nuclear weapons since it would ‘enhance the value of mobility, because rapid dispersions and concentrations, such as can be effected with cross-country vehicles, will become doubly necessary’. This was a view shared by another tank enthusiast, Major General Sir Harold Pyman, who wrote in the RUSI Journalthat ‘armour supported by atomics and atomics exploited by armour present a new means of ensuring true mobility on the battlefield in both offensive and defensive operations’.

Calls for greater mobility by atomic military theorists should not be viewed in isolation, but understood within the wider context of the ongoing debate about the theory and practice of armoured warfare. The Second World War had witnessed the ascendancy of increasingly complex logistic systems to support frontline units, and champions of manoeuvre warfare lamented the way in which armoured divisions, in particular, had become anchored to their extremely cumbersome, road-bound, administrative tails, which had a tendency to restrict the mobility and flexibility that was so desired in mechanized formations.  It was predicted that these exposed life-lines would become the Achilles heel of armies operating on the atomic battlefield. Therefore, theories of tactical nuclear war contributed to, and were informed by, the wider debate on organisational transformation in the Army. Of course, since the interwar period military intellectuals in Britain such as Fuller, Liddell Hart, and Martel had argued that the destructiveness of modern weapons would see the death of the mass land army of First World War vintage. In the atomic era, the attainment of the tactical ideals of mobility and flexibility would become even more urgent than they had in the 1920s.

Uncertainty about the future operating environment reinvigorated engagement with abstract concepts such as the principles of war. The principles of war provided the professional soldier a tool by which the uncertain consequences of the atom could be dissected, and provided a familiar lens through which the changing character of conflict could be observed. Some writers advanced the notion that tactical nuclear weapons positively reinforced the significance of certain principles while adding a new twist to others. For example, some officers thought that principles such as ‘Surprise’, ‘Mobility and Flexibility’, and ‘Morale’ would gain greater relevance in nuclear land combat, and that the principle of ‘Concentration’ might be modified to mean that it was as equally important to force the enemy to concentrate in order to provide a suitable atomic target.

With a lack of precedent to inform operational planning, it could only ever be an assumption that the principles of war would remain unchanged in the atomic era. It might be, as the editor of the Royal Armoured Corps Journal pondered, that for ‘the first time in the history of war, experienced gained in the immediate past fighting is going to be of little value to the future warrior’.  Some military intellectuals were more optimistic and maintained that the basic principles were still sound, but that they would require a slightly different application. After all, wrote one officer in the Royal Armoured Corps Journal, ‘the physical effects of an atomic explosion are heat, blast, and radiation, the two former of which are not new to war’.

This was not to say that all writers agreed that the principles of war would remain relevant in an age of nuclear plenty. In a fictional narrative written for the British Army Review, the author wrote about a future tactical nuclear war where the main protagonist, a young officer who was a product of the 1950s British Army, had been transported into the forward headquarters of an allied nation in a future atomic land war. The character naïvely asked his commanding officer about the principles of war in the nuclear age:

‘Principles of War!’ hooted the general. ‘Damme, this is the most unprincipled war I was ever in. What about economy of effort when we use a bomb capable of devastating a town merely to destroy a battalion of infantry? Maintenance of the aim? What aim? If I have any principles left they are:

Never concentrate while the enemy has any missiles left.

Smash the enemy wherever he concentrates.

Ceaseless observation over the whole theatre.

Re-examination of the principles of war failed to provide any conclusive insights into the conduct of the nuclear land battle. Yet, one might argue that it is better to have an intellectual reference point that is tangential than none at all. After all, highlighted the editor of the British Army Review, the atomic military theorists ‘are on a good wicket because no one can prove by quoting past experience that they are wrong’.

That there were contrasting visions of a future war is not surprising. Military theorists were not working in an intellectual, professional, or political vacuum. The background against which these writers were publishing their articles was one of fiscal stringency; increasing government pressure to reduce Army conventional forces; and uncertainty about the future of the service in a rapidly changing military environment. These external factors bore their mark on the writings of the military theorists, many of whom took partisan views in order to promote the continued relevance of cherished capabilities. Proponents of armoured forces argued that tank warfare would play a decisive role in a future war; gunners maintained that the future battlefield would become dominated by the atomic cannon; whilst infantrymen reaffirmed the importance of traditional infantry combat to the successful prosecution of atomic land warfare. This is not to say, however, that these theories were political statements, but the bureaucratic environment within which the publicists were working certainly influenced perceptions about the changing character of conflict and the Army’s role within it.

These theories were personal to each individual writer – they owned it and took responsibility over it. This has to be contrasted with official doctrine, which is corporate, although there is evidence to suggest that many of the concepts enunciated in the service journals did influence official written doctrine. What is clear, however, is that if we accept Brian Holden Reid’s definition of a military intellectual as ‘a thinking, serving soldier, interested in ideas and fully imbued with the ethos of the profession of arms’, then the early prophets of nuclear land warfare are a case in point.

Image: the mushroom cloud generated during Britain’s first hydrogen bomb test as seen from an aircraft flying above the local natural cloud on 15 May 1957. The weapon was dropped high over Malden Island in the Central Pacific by a Royal Air Force Valiant bomber, via the imperial war museum.