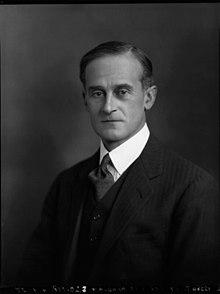 Dr Jim Beach of the University of Northampton explains the birth and early years of an important forum for interwar military debate. Jim has edited the military papers of Lieutenant Colonel Cuthbert Headlam for the Army Records Society.

On 24 February ninety-nine years ago, two former British army officers sat down and discussed the creation of a new journal of military affairs.  Guy Dawnay and Cuthbert Headlam were old friends from their university days in Oxford.  In 1918 Guy had been the major-general responsible for doctrine writing at GHQ in France while Cuthbert had been a lieutenant-colonel and author of the British Expeditionary Force’s main doctrine manuals.  Both in their early forties, they were an odd couple.  Guy an outgoing Guards officer and businessman; Cuthbert a more reserved Yeomanry officer and civil servant.  Both were considered by their peers to be very bright and they shared a mutual interest in what would now be termed national security. As the better-known of the two within military circles, Guy was to be the journal’s editor and Cuthbert his assistant.  In understanding the evolution of the journal, we are fortunate that Cuthbert was an almost-compulsive diarist.

Today they might have launched a blog like this one but in 1920 their options were, of course, limited to the print medium.  They therefore approached a publisher, George Clowes, and successfully pitched the idea to him.  Initially, the financial arrangement was that the pair of them would share the editorial remuneration which was the equivalent to £25,000 per annum in modern money.  However, Guy’s business workload meant that by the time the journal was launched in September, he was editor in name only.  The money is important to the story.  Yes, both men had an interest in providing a forum for defence debates, but the underlying truth was that Cuthbert really needed the cash.  He was a parliamentary clerk but keeping up the lifestyle demanded by his social connections was outstripping his modest income.

To our modern eyes it may seem a bit odd that a civil servant would spend his mornings in the offices of a commercial publisher stoking arguments over defence issues before heading to the Palace of Westminster for his day-job. The situation was eased in 1924 when Cuthbert became an MP.  However, a significant conflict of interest arose when, two years later, he became a junior minister in the Admiralty.  With a sleight of hand that might surprise today’s observer, Cuthbert simply declared his brother as the journal’s assistant editor and recipient of the salary while continuing to do much of the work himself.  This perhaps also says something about ministerial workloads in the 1920s?

Although initially optimistic about the venture, Cuthbert’s relationship with the Army Quarterly became something of a love-hate one.  It gave him kudos within defence circles and the editorials allowed him to hold forth on issues that vexed him.  But he quickly tired of the work, especially the four-times-a-year deadlines.  His History degree seems to have given him high literary expectations, so Cuthbert was also irritated consistently by what he perceived as poor-quality writing by the journal’s contributors.  When they were serving or recently retired senior officers this presented him with an editorial dilemma as to how far he should intervene or even reject.  Unsurprisingly, junior officers got shorter shrift.

Overall, the Army Quarterly can be judged as moderately successful in that it established itself as a forum within which army issues could be debated.  That said, the subscriptions were never enough for it to turn a consistent profit and Cuthbert eventually had to take a salary cut to keep the thing afloat.  Over time the journal also came to be seen as semi-official – in part due to Cuthbert’s conscious efforts to forge closer links with the War Office.  These failed in their aim of attracting a financial subsidy, but at least improve circulation within officer’s messes. Army Quaterly also became seen as ‘official’ in other ways – providing lists of senior officer appointments and also hosted the army’s annual Bertrand Stewart essay competition.  With regard to the latter, Cuthbert did not relish the judging process.  For example, in 1923 he wrote:

‘The thought of plodding through the essays fills me with a feeling of despair.  They will be intolerably dull!’

The journal’s proximity to the army sometimes caused embarrassment in official circles when foreign governments took exception to its content.

This relationship between the army’s hierarchy and Cuthbert-the-editor was a curious one.  His frequenting of London clubs and wartime service on the staff, especially at General Headquarters, provided him with contacts which in the 1920s gave him access to key individuals and departments within the War Office.  But by the 1930s, although some like John Dill went on to become senior leaders, his network had mostly retired.  This lack of currency was further exacerbated by Cuthbert’s departure from the Yeomanry in 1926, having never fully embraced his regiment’s re-roling as an artillery unit.

More fruitful in the long-term was Cuthbert’s cultivation of James Edmonds, the official historian of military operations in the First World War.  On several occasions when he was struggling for articles or a book reviewer, Cuthbert was able to rely upon Edmonds’ contributions. In return, the official historian got an early outlet for small parcels of material and the opportunity to engage anonymously in arguments over the British army’s performance during the war. There are perhaps parallels here with the anonymous defence bloggers today?

Eventually, it ended in tears.  Across the 1930s Cuthbert became increasingly less interested in military affairs and sought to prioritise a political career that promised but never quite took off.  As at the start, he stuck with the Army Quarterly because he needed the money. The crisis came in the early part of the Second World War.  The journal found itself associated with a conservative, Colonel Blimp mentality that had, in the eyes of its critics, infected the British army.  Cuthbert hung on, but in 1941 he was sacked and replaced by a former commandant of the Staff College – Maj Gen R.J. Collins.  The Army Quarterly thus moved into a second phase that awaits its chronicler.

Image: Headlam in 1927 via wikimedia commons.