Gareth is an Army Officer currently studying at the UK’s Defence Academy and King’s College London. He is undertaking a Masters by Research that is considering the utility of Cold War deterrence experience to the theory and practice of modern deterrence.

Almost two decades into the twenty-first century, academics and practitioners alike risk getting the role of deterrence in international affairs fundamentally wrong.  This is a bold statement – not least because some of the greatest strategic thinkers and international relations scholars have emerged from the field of nuclear deterrence. Nevertheless, the fact remains that modern understandings of the term have allowed it to expand deterrence beyond its linguistical origins and practical utility.

Deterrence aims to maintain the status quo through discouraging actions by altering the adversary’s decision making choices.  With its origins in the Latin term, deterrere, the traditional focus of deterrence was on the creation of fear in an opponent.  Yet since the end of the Cold War, state practice, and with it the literature, have expanded the concept so broadly that it increasingly lacks analytical value or policy-making utility.

Some of today’s literature blends calls for national resilience with actions reminiscent of social reform. These are important contributions but they have inched ever further away from the traditional understanding of deterrence to something different.  With this expansion comes a loss of clarity about what deterrence is and what it is not. Heeding Sir Michael Quinlan’s calls to reject denial strategies as part of deterrence might have prompted earlier thinking about the language used to describe what states are trying to achieve.[1]  Rejecting the role of denial could have prompted a much earlier realisation that fear and the use of the military need not be the sole way to change an adversary’s mind.  Other options have always been available but persisting in dressing them up as deterrence obscured their potential.

With its array of potential subjects, ranging from non-state to state actors, and covering a multitude of threats the UK’s ‘Modern Deterrence’ approach is ambitious.  Noting this, the same publication describes how bringing ‘Modern Deterrence’ to life requires contributions from across the whole of government and that it will likely lean heavily on Fusion Doctrine to function effectively.

The United Kingdom has not been alone in adding qualifying adjectives to deterrence to describe what it is trying to do.  The US have proposed multi-domain deterrence and before that cross-domain deterrence. RUSI’s ‘Modern Deterrence’ programme has been vocal in its support for national resilience forming the bedrock of the concept.  There has also been a steady stream of literature considering the impact new domains might have on the development of deterrence.  None of this would be problematic if it were not for the fact that deterrence has a history.  If the passenger on the Clapham Bus, to borrow from the courts, were asked it is highly likely that their thoughts would quickly turn to the role of nuclear weapons.  Thus despite its expanded meaning, and the much broader history of deterrence practice, the nuclear bomb and deterrence have become synonymous.  Deterrence has been brought into being in the shape of nuclear weapons.  When governments call for ‘Modern Deterrence’ to be practiced across the whole of government they are introducing a concept that is, for some parts of government, alien if not contrary to their purpose.

I would argue that it is high time that the labels applied to the concept of deterrence are reconsidered.  Indeed, given its nuclear connotations, it could be argued that now is an appropriate time to banish ‘deterrence’ itself from broad usage and replace it with something else.  Common to all elements of the expanded use of deterrence has been an unrelenting focus on changing the calculations of an adversary.  It has been about influencing others not to change the status quo. Reading Thucydides it is apparent that what lies heavily on the minds of various actors, whether it be Cleon pondering the execution of the Mytileneans or the Athenian despatch of ships to Corcyra, is how their actions will affect their future ability to influence others. It is the influence outcome which is central to deliberations not the means or method employed.  When deterrence was brought into being as a specific capability or set of capabilities, this sense began to wane.

To return to the inflammatory opening remark, academics and practitioners got deterrence wrong by allowing it to be used as a catch all term for a series of actions that might have been better labelled something else. Rather than speak of deterrence, academics and practitioners should consider influence as the descriptor for what states now seek to achieve.  Influence has been in the wings of deterrence literature for some time but has not made it to centre stage.  Bringing influence to the core of the approach is helpful; it is less toxic than deterrence and more comfortably accommodates the range of activities and methods that states now talk about employing.  Jeffrey Knopf perhaps provides the perfect term, ‘preventive influence’, to describe the much expanded field of actions that this represents.

Preventive Influence need not replace the existing literature on the various forms of deterrence.  Instead, it embraces and borrows from the existing works.  The Cold War considerations of capability, credibility, and communication remain key.  So are considerations of deterrence by punishment and denial.  But these are now set against a much broader array of capabilities brought about by thinking across all levers of government.  These broader tools also allow an additional approach to be added to the playbook; some adversaries might be incentivised to remain within the status quo.  This is far from the generation of fear that deterrence has traditionally been associated with.  The diagram below shows how it might be organised to provide options for the state. 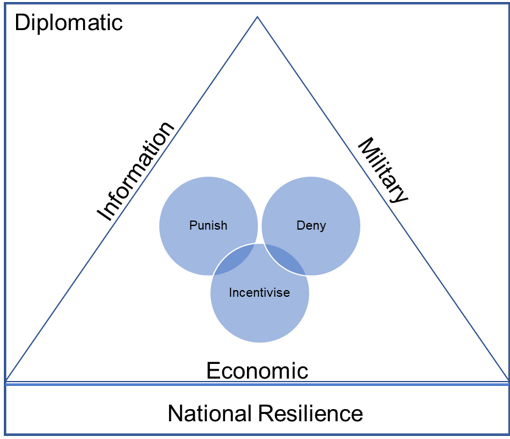 Several points are worth noting. First, it must be based on the attainment of an acceptable level of national resilience.  The purpose is two-fold.  It ensures that the state reduces its vulnerability to attack and is then able to recover from the effects of an attack.  Given the dependencies that exist between industry, the state, and the induvial, the burden of responsibility is in this area is spread beyond the state infrastructure.  But there is also a further, more profound purpose.  Grey zone actions, particularly misinformation acts, seek to break the bond between state and citizen.  If this erodes and confidence in the government ebbs it becomes increasingly probable that states would be able to conduct the full range of preventive influence options available to them.  With diminishing options and a reluctant public, democracies are likely to encounter a corresponding decline in the credibility of their threats.

Second, influence is guided by diplomacy.  This reverses a trend since the Cold War for the military to dominate the discussions of deterrence.  The Diplomatic lever directs the relationship between deterrer and deterree.  Changing the mind of an adversary (or indeed a child) requires not simply threats but assurances that good behaviour is rewarded. Third, it is expected that, as now, each of these influence options would have their own escalatory options. A state might choose to blend a robust Information approach with more nuanced use of Military and Economic levers. All of this is set against the Diplomatic lever shaping the environment to nudge adversaries into not departing from the status quo.  Fourth, all of this assumes that the state has control and understanding of its levers of power.  As Keith Slack has noted the UK’s use of Information is currently problematic.  Others might questions whether financialisaton and the required reforms to UK regulatory ability to counter money-laundering impact adversely on its ability to employ the Economic lever adequately.  These are serious questions worthy of much fuller exploration than can be achieved here.

Embracing Preventive Influence as the organising principle for ‘modern deterrence’ has implications for the organisation and management of defence and security.  With the National Security Council, Fusion Doctrine, the MOD’s Net Assessment Unit many of the components that will be required are beginning to emerge. The necessary reforms might need to go deeper though.  If the much avowed complexity of our times is true it would seem foolish to cling to the structures of the past when the future requires change.  None of this is new though.  In 1963 E.J. Kingston-McClourghy was calling for the same type of structural reforms to meet the challenges of nuclear deterrence.[2]  Today, the UK faces a similar choice to cling to the vestiges and language of the past or accept that it is time to reframe what it is seeking to achieve and reconsider the most appropriate means of doing so.  Adopting the language of Preventive Influence is but a start on this.