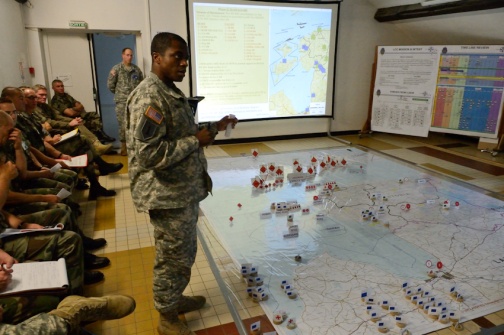 To see in the New Year, Defence-in-Depth is re-publishing its three most-viewed posts of 2019. At No. 2, a post from the MRes programme on the evolving concept of the operational level, and its utility in operational planning processes today.

This post is the second of two articles on the operational planning process in Britain and France. You can read the first post here.

“The real tradition in grand things is not to repeat what others have done,

but to recapture the spirit that made these things

and would make completely different ones in another time.”

In a previous post I argued that the operational planning process is in need of reform. The arguments I forwarded reflected a broader series of challenges to the structure of the operational level itself – particularly in terms of its formalization in modern doctrine. Indeed, I believe that the value of this concept has significantly decreased because of a far too rigid and military-centred application, which does not fit the current operational context. It has therefore not been able to produce sufficient effectiveness in our current operations and has somewhat lost ground with its political essence as well as the ground-realities.

In the Western military community, everyone agrees on the centrality of the operational level. This doctrinal object and the discipline most notably associated with it, namely operational art, are at the centre of military high education. However, it is fascinating to note that everyone has their own perception of what should stand under this banner. Beneath the engaging and clear-cut concept lies indeed some vagueness about what belongs to this intermediate level and what is being done there. Is the operational level the hub where all operations are managed, or is it the level of command of a single operation, or is it a little of both?

The rationale behind the modern structure of forces, despite well-ordered wiring-diagrams, is indeed not always evident when unpacked. Rare and long-range capabilities, such as airborne assets, can hardly fit into the box of a ‘component’ command, for example. Similarly, should we really talk about an operational level, when only a handful of companies are involved in a given operation? At the bottom line, it seems that the qualifier of ‘operational’ is allocated to a structure or organisation depending on how it is perceived by its own strategic community, rather than by an objective logic. This phenomenon can manifest itself acutely in a coalition context, where the interpretation of the concept of the operational level among the nations involved is sometimes very heterogeneous.

For the Prussian and later Soviet fathers of the ‘level’ idea, this was clearer: the mass of armies in play justified splitting them into intelligible chunks, so as not to drown in a maelstrom of tactical contingencies, and thus to maintain the perspective that suits high command. The goal was really simple: it was about enhancing effectiveness. The problem of scale is no longer (for now) the main obstacle to solving the majority crises or situations in which Western armed forces are likely to find themselves. Not only are the military assets committed in today’s operations comparatively modest in size, but the technological conditions of execution have improved dramatically. Contemporary conflicts have different codes and constraints, some of which the creators of the operational level were not really confronted with. One should, therefore, have no surprise in how difficult it is to adapt this concept when called upon to a totally different context without significant adjustment. If anything, the operational level could have kept a geographical relevance. Contemporary theatres of operations, which span from the size of the district to that of a subcontinent, undoubtedly deserve to be subjected to an overall strategy. But the resolutely military nature of the operational level systematically tends to make it a patrol ground or a field of targets, not the scene of a wicked problem, requiring force as a necessary but not sufficient means.

Surprisingly, that which should have legitimately survived from the idea of operational level has almost vanished. Today, whilst large-scale warfare seems to have given way to limited conflicts, the preservation of tactical excellence, which was at the heart of the original concept of the operational level, is arguably viewed as less important than the conduct of operations themselves. When one ‘reaches’ the heights of the operational level, it would seem that the time for tactical ‘trivia’ has come to an end. No need to know the properties of the infantry division or the details of the maritime task group’ tactical modes. The operational level is, in theory, that of effects and large handfuls, of roughly drawn maps where large multi-coloured ovals are drawn. Hypnotised by ethereal and overly conceptual methodologies, the operational level thus seems to have become the domain of some sort of professional amateurism, within which it is frowned at to descend into ‘tactical weeds’. But tactics are not weeds. In combination with logistics (if we choose to distinguish them), they deal with the hardships of reality, which the operational level is quite wrong to underestimate.

From its earliest days in Western doctrine, the operational level has suffered from an ambiguous relationship with strategy and political sphere. Political interference in the conduct of operations such as Vietnam left a bitter memory in the military. Underneath the mask of ingenuity that is attached to this structure, lies, therefore, a less admirable purpose: that of not being disturbed by ‘outside’ interference. The operational level is indeed often considered as a military private preserve. Some civilian advisers are gladly welcomed there, but, to a large extent, the operational level is a structure of military essence, under the tutelage of the military strategic level, where, above all, politics has no place. But, as Clausewitz has long established, the logic of translating political objectives into a sequence of tactical actions can only be continuous. It is thus both illusory and nefarious to isolate in this way the campaign from the political authority. Politicians will continue to interfere with operations whenever the implications dictate it: regardless of the prevailing military doctrine, they have the legitimacy and now the technical means to do so. Besides, seeking to sever the relationship between operations and the political authority is counterproductive because, by considering the operational level as an interruption, operations are ‘unclutched’ from their intended purpose, which is ever changing and uncertain by nature.

The idea of an operational level could be considered from a more philosophical perspective, as was the case with some of Svechin’s precursors, such as Leyer or Gerua. They sought ‘to provide an intellectual perspective from which commanders and their staffs could envision and plan for the sum of disparate activities and actions over time and space that went into the makeup of a modern military operation’ (Menning, 2007). In the current context, this would involve setting up inter-governmental operating structures for each complex operation that requires it. In this case, however, there would still be a great deal of work to be done. Inter-governmental work indeed remains a complicated and often daunting exercise, carried out at the strategic level and struggling to produce concrete and productive interactions. By taking this argument to its farthest limits, this would mean putting an end to the military’s exclusive control over these structures. It would also mean disrupting relations between diplomats and the executive power, by inserting a coordinating authority at the heart of a historically privileged relationship. Far more than a level conveying orders from the strategic level to military field units, such an operational structure would become a catalyst for all the state’s levers of power to address a given problem. This is a far cry from such an upheaval.

The concept of the operational level needs to be profoundly refurbished. Indeed, by applying blindly a layered division to the organisation of deployed forces, the letter has taken over from the spirit. In order to create structures better able to make sense of contemporary crises, we should revert to a less geometric and more flexible vision of its application.

Image: Rapid Reaction Corps HQ, based in Lille, France, prepares for the 2014 rotation of the NATO Response Force, via flickr.