At the end of last year, the King’s Centre for Military Education Outreach (CMEO) put together its first ever Professional Military Education (PME) Working Group. This took place over the course of two days on the 10 – 11th December 2015, at the Joint Services Command and Staff College (Shrivenham, UK). The event was attended by around 35 military education practitioners, from nations including: Canada, Egypt, Georgia, Japan, Kuwait, Nigeria, Norway, Pakistan, Qatar, Singapore, and the UK.

For anyone interested in learning more about the discussions on the day itself, a range of presentations are available for download on the Defence Studies Department’s online events archive. This includes talks by senior officials from the National Defense University of Pakistan; the Nigerian Defence Academy; Joint Services Command and Staff College (UK); Norwegian Armed Forces Defence University; Nasser Higher Military Academy (Egypt); and King’s College London. In addition to these presentations, however, the event resulted in another interesting source of data. As part of the workshop, evaluation forms were handed out to attendees, asking them to provide their insight on the future strategic goals for PME.

Due to the mix of internationals who were present at the working group, attendees were asked whether they believed their PME challenges were different to those of their international peers. Responses to this question were split, with half of the respondents saying their challenges were similar with those of their international peers and half saying that they faced different challenges altogether. Despite this split, respondents acknowledged that any differences in systems were “clearly driven by culture and context”, and that one key area of difference was the level of support that educators received from their superiors. One respondent commented that, at its most basic level, the key issues faced by militaries remained broadly similar: “time, budget and mandate”. Above all, respondents noted that it was important to have international gatherings that allowed educators to discuss both the differences and similarities between their systems. This type of gathering “informed, emphasized context and encouraged wider thinking”.

Attendees were also asked what subjects they thought should be prioritised for academic research on PME. Responses included “academic rigour”, “enhancing staff officer PME in the early stages”, increased use of “simulation”, and “democratising access to PME”. Indeed this recurring theme of democratizing education, was elaborated upon by one respondent as “a focus on the whole rather than the elite and how to manage late bloomers, different thinkers and those that fall outside the requirements of the ‘successful’ career mould.” Another respondent commented that the very concept of strategic studies required greater further analysis in academic study, and that this “necessitates deep and timely study of recent ops of campaigns, and a corresponding feedback loop to doctrine and education.”

Attendees were then asked which three competencies they believed were vital for successful PME. Respondents commented upon the need for educators to have credibility informed by experience, including a comprehensive understanding of the military profession, international security, and warfare. Yet most responses were directed to personal qualities, such as curiosity, strong networking skills, innovation, perseverance, willingness to change but not drift, agility/flexibility and sense of humour.

When asked which key action points discussed during the event needed to be implemented as a matter of urgency, attendees commented upon the need for policy simulation in military-strategic exercises; increased democratization of education; better identification of the points where officers’ career paths and educational requirements diverged; new focus on national security for all citizens; and greater academic/military balance in PME.

At the end of the evaluation form, attendees were asked to place seven “strategic challenges” into categories of importance. The categories included 1. Top priority; 2. Very important; 3. Important (but not urgent); 4. Useful (but not important); and 5. Counter-productive. The results were as follows: 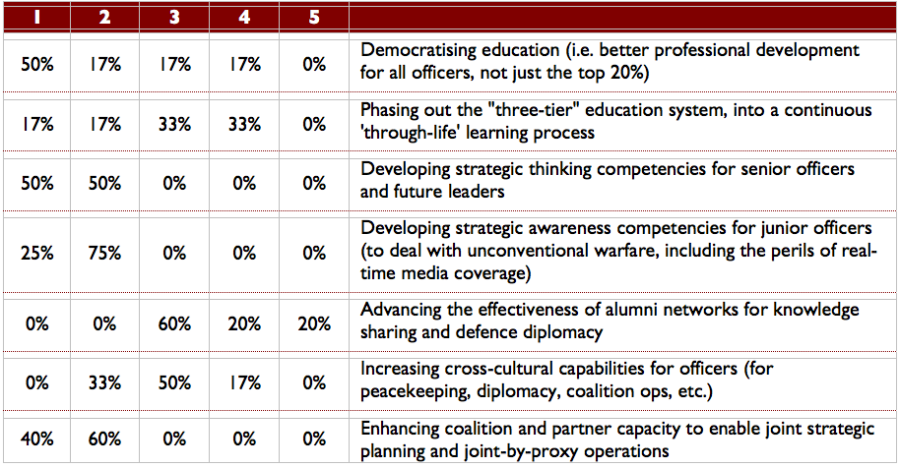 Although these evaluation forms were an informal means of gaining insight, with a relatively small sample frame, the results provide an interesting insight into some of the strategic opinions held by senior military educators in the contemporary PME environment. There exists natural variation between different nations’ PME requirements. However, for educators across the world there exists an increasing emphasis on improving strategic competencies at all levels of officer education, jointness between forces, blended learning techniques, and professional development for the 80% of officers who fall outside of the traditional advanced command and staff course.

Image: An interior shot of the Defence Academy, Shrivenham, Wiltshire via Defence Imagery.