Are memorials set in stone? It seems an obvious question. Yes, of course they are, and the Delville Wood and Vimy memorials are two stunningly evocative examples, set in stone as perennial testaments to those who died, those who missed them, and the emerging nations who lost them.

Yet in the complex new era of war remembrance which followed the First World War, these two national monuments could not represent a singular cohesive national identity of their respective dominions: there wasn’t one. Both Canada and South Africa encompassed multiple identities, which were not at all ‘set in stone’, unlike the memorials that embodied them. To comprehend the various meanings ascribed to these sites, they must be understood as sites of hybridity. They are intersections of multiple narratives, both personal and collective, and as such have been perceived through the lens of many differing identities over time.

When the First World War’s hostilities ended with the armistice on 11th November 1918, life could not immediately resume even a semblance of normality. Thousands of bodies had to be buried, memorials had to be erected, and societies worldwide were left reeling from the impact of an unprecedented conflict. The war was a critical point in the history of the British empire: it complicated the relationship between Britain and her dominions, leaving them to navigate new aspects of their national identities and their connections to the metropole.

South Africa and Canada, through their national memorials in France, present a particularly interesting twinned set of case studies with which to explore this phenomenon. South Africa’s Delville Wood Memorial and Canada’s Vimy Memorial were unveiled in 1926 and 1936 respectively.

It’s tempting to view the relationship between dominion and imperial identity as a dichotomy wherein the expression of one assumes a suppression of the other. However, affinities to Britain were often incorporated within, not repudiated by, the national identities newly asserted by the dominions. There was also tension and overlap between three types of identity forged by the war: unifying national identity, identity based on shared experiences of the war’s personal impact, and factional identities based on internal divisions. 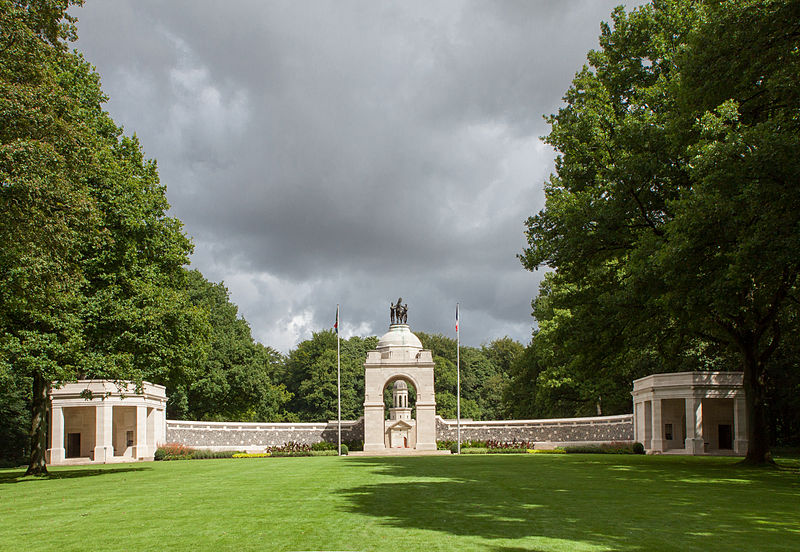 Delville Wood, South Africa’s national monument, is located at the site of one of the first major engagements of South African forces on the Western Front. It was a pyrrhic victory: in four days of fighting during the Battle of the Somme 75% of the South Africans involved were either killed or injured. This monument is unusual in two distinctive ways, which warrant particular attention as reflections of South African identities in relation to Britain.

First, unique among colonial memorials on the Western Front, this one bears no names. The South African missing are commemorated individually by name on British memorials, instead of on their separate national monument. Considering the recent history of the preceding Second Anglo-Boer War, this unusual decision calls particular attention to the question of South African agency vis-à-vis British control over decisions concerning remembrance.

Second, the arch is crowned by a sculpture of two men and a horse, created by British artist Alfred Turner. The official description states that the sculpture depicts Castor and Pollux, as a “symbol of all the peoples of South Africa who are united in their determination to defend their common ideals”.

Castor and Pollux were Greek mythological twins, and their twinship here was stated to represent equality between the two ‘white races’ of the South African Union. In addition to the blatant omission of Black South Africans from this symbolism, also conveniently omitted from the official description is the fact that despite being twins, in mythology Castor and Pollux had different fathers: this meant that Pollux was half-divine, while Castor was only mortal.

Approached with this knowledge, the figures don’t seem quite so equal after all, and based on the circumstances it is interesting to consider it as a subtle assertion of British superiority. The demarcation between dominion and imperial identity is less distinct here, since Britishness is being portrayed as an integral part of South African identity, rather than an opposing force to react against.

The Vimy Memorial and the Canadian flag. Photo taken by the author, 2016.

Unlike Delville Wood, Canada’s national memorial at Vimy does have names of the missing: more than 11,000 of them. The victory at Vimy is seen as a potent symbol of Canadian identity. The memorial was originally submitted by Walter Allward in a competition to select a design that would be repeated at eight Canadian battlefields; but its arresting nature and originality quickly gave rise to its selection for a single site, which became Canada’s sole national war memorial on the Western Front.

The largest individual sculpture on the monument highlights specifically Canada’s sorrow: the 30-tonne Mother Canada mourning her fallen sons stands in perpetual grief overlooking the empty tomb on the monument. However, alongside this display of a unified conception of Canada, there’s a multitude of allegorical sculptures on the monument representing Canada’s shared identity with Britain and France based on common values and experiences. These demonstrate the degree to which Canada’s newly asserted national identity was still proudly founded on its ties to Britain.

Mother Canada and the empty tomb on the Vimy Memorial. Photo taken by the author, 2016.

Despite their unchanging nature, the way that people understood these monuments was not as static: each individual perception of these sites was shaped by an intersection of personal and collective narratives, and it is to these we must turn to gain an understanding of the aspects of identity through which conceptions of these sites were filtered.

An enduring social issue extending from the war into decades of aftermath was the search for meaning and justification. When the war began, loyalty and debt to Britain were trumpeted as the dominions’ rationale for engaging, but as the war dragged on, this rhetoric of justification grew to include the defense of civilization and of fundamental principles. After the initial surge of volunteers had faded and conscription became a pressing issue, the catastrophic casualties already suffered were used to justify the need for more men: more were needed for victory, and if victory were not achieved, then the losses already suffered would be in vain.

Although unveilings and pilgrimages drew significant attendance to these memorials from the dominions, the bleak truth remained that these memorials would still never be seen by most people to whom they were important. Instead, these monuments, and at Vimy specifically the individual names carved in stone, lived large in people’s imaginations as fixed and tangible focuses for their grief.

In her novel about the Vimy memorial’s construction, Jane Urquhart underscores how these names could serve as lodestones for personal mourning: “There is absolutely nothing like the carving of names. Nothing like committing to stone this record of someone who is utterly lost.”

Distance was only one aspect which helped to forge cohesive national identities during the war and its aftermath. Common loss created another shared experience which served as a fundamental aspect of each country’s identity. In the dominions, loss was tempered by a strong sense of achievement: the war was seen as a test successfully passed. These newfound dominion identities were not reactions against Britain; national unity did not negate loyalty to empire, but rather reduced the degree of subordination in the relationship.

Respect for the soldiers and their sacrifices helped knit together national identity, but could not dissipate internal divisions which fragmented ideals of national unity- along linguistic, cultural, racial, and experiential lines. Less contentious, but significantly impacting self-perceptions, were identity groups which crossed national borders, and arose based on shared wartime experience. The concept of a ‘lost generation’ was prevalent; although most soldiers actually did survive the war, they were ‘lost’ in another way, in that for many, their experiences had alienated them from their home front society.

Changes in memory and perceptions of the war from 1939 to the present significantly impacted how people understood the war, remembrance, and the memorials themselves. As WWII erupted, it was realized with sinking hearts that WWI had not been the ‘war to end all wars’ after all, and this threw the sacrifices of the dead, and thus the consolation of the bereaved, into a very different light.

Each generation since 1914 has had a distinct set of shared experiences and learned narratives which have shaped their relationship to the war. As time created more distance between WWI and the present, individual experience was subsumed to a degree within a more collective memory of the war, and yet there is an ongoing fascination with individual stories and deaths. Annual commemorative events at these memorials also reflect the enduring significance attached to national remembrance.

Canadian students reflect at the Vimy Memorial on the anniversary of the battle, April 9th 2016. Photo taken by the author, 2016.

These two monuments allow a more complicated and nuanced understanding of these dominions’ identities as shaped by the First World War, including their relationships to imperial identity. Not always a dichotomy, Canada and South Africa often incorporated elements of their British identity within their newfound national self-conceptions. However, behind this projected unity lay disjunctions in dominion identities caused by the war, either through differing experiences of it or based on internal divisions over war-related issues.

This meant that these monuments were significant representations of multiple identities, with complex and shifting relationships. They held varying meanings, reflecting different aspects of grief, memory, and experience for each person; to comprehend how they were perceived through time, we must understand these memorials as sites of hybridity, at which a mix of identities- personal and collective, dominion and imperial- intersected.

Featured image: Some of the 11,000+ names of Canada’s missing inscribed on the Vimy Memorial. Photo taken by the author, 2016.