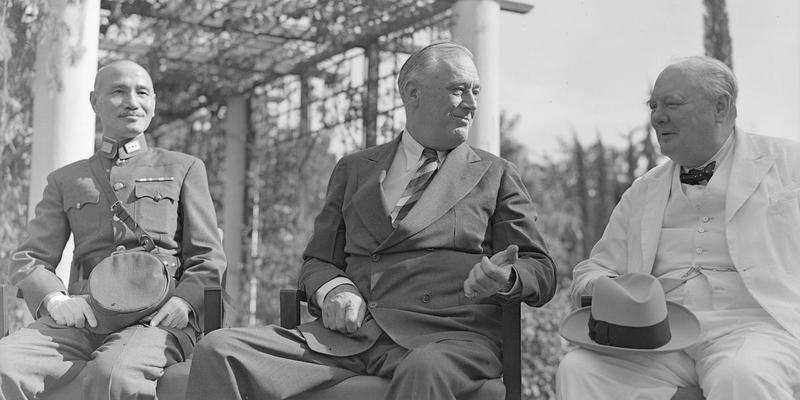 This is the fifth in a series of posts connected to the King’s College Second World War Research Group’s ‘1940-1942: Fulcrum of the Twentieth Century Conference’, held at the JSCSC on June 1st.

Traditionally Chiang Kai-shek has been treated in western historiography as a failure: the man who presided over the epic loss of China. In recent years, however, he has been the subject of more balanced assessments, and nuances have appeared, leaving space for remarks such as this: “Sometimes, Chiang Kai-shek was more farsighted than either Roosevelt or Churchill.” The words belong to his American advisor Owen Lattimore. Are they an exaggeration? A look at Chiang’s reaction to Operation Barbarossa, Germany’s attack on the Soviet Union on June 22, 1941, may help the reader decide for themselves.

China had precise advance information about the German plans for an attack. In the spring of 1941, Vasilii Chuikov, a Soviet advisor to the Chinese Army, was warned by General Zhang Chong, the head of Chinese intelligence, that a German assault could be expected in June of that year, or July at the latest. As the date of the German offensive approached, Chiang Kai-shek exhibited almost uncanny premonition. When he was informed of the conclusion of the German-Turkish Non-Aggression Treaty of June 18, 1941, he guessed rightly what Germany was doing. “It will be just a few days before Germany attacks the Soviet Union,” he wrote in his diary the following day.

When Barbarossa did indeed happen, Chiang’s immediate reaction was one of rekindled hope for the future. “Japan can no longer concentrate on defeating China, nor can it any longer assume that by beating China it will reach its objective of dominating East Asia,” he wrote in his diary on June 24. “The combined forces of the United States, Britain and the Soviet Union are now containing Japan… This means that China is already halfway out of its national danger”.

The new situation was only of any real advantage to Chiang if the Soviet Union agreed to go to war with Germany’s Axis partner Japan. However, persuading Stalin to do so was a formidable task at a time when the Soviet dictator found himself in a life-and-death struggle with Germany, and could rest reasonably assured that Japan would refrain from attacking from the east, since Moscow and Tokyo had signed a non-aggression treaty in April of that year.

Even so, Chiang tried his best. On July 2, for example, he informed Lauchlin Currie, the chief US representative in Chongqing, of reliable intelligence that Japan had decided to abrogate the non-aggression treaty and shortly afterwards declare war on the Soviet Union. The intention was probably for the United States to pass on the information to the Soviet Union and that in the best-case scenario it would launch a pre-emptive attack against Japan.

The sources suggest that Chiang himself had no expectations of an imminent Japanese assault on the Soviet Union. According to Lattimore, his American advisor, the Chinese leader “was convinced, even in the first week of the Nazi invasion of the Soviet Union, that as the Soviets would eventually defeat the Germans, the Japanese would not honor the Berlin-Tokyo axis and attack Siberia from the east to help the Germans in the west.”

Chiang was exactly right. Only a minority of decision makers in Japan supported the idea of accommodating the German ally by attacking the Soviet Union from the east. Chiang had an advantage few if any of the other Allied leaders had in World War Two. He understood his primary enemy intimately, speaking the Japanese language and having attended military academy in Japan

While the sources suggest that Chiang considered a Japanese attack on the Soviet Union unlikely, they do not say what he thought about the likelihood of a Soviet attack on Japan, but he ought to have known that it was probably not going to happen. After all, every previous attempt at dragging the Soviet Union into the war had failed, even under circumstances that were vastly more advantageous to the Soviet side.

In the fall and winter of 1937, China had tried repeatedly to pull the Soviet Union into the war with Japan, but had been rebuffed every single time, as Stalin had argued intervention would be counterproductive by rallying Japanese society behind the war effort and putting the Soviet Union in the role of the aggressor. In fact, in 1937 the Soviet Union welcomed Japan’s Chinese quagmire, understanding that it weakened the danger Japan posed to its eastern border.

Even though Chiang must have considered a Soviet-Japanese war improbable in 1941, he undertook steps which later historians have interpreted as designed to lure Stalin into action.

His government, located in the wartime capital of Chongqing in China’s interior, decided on July 2 to cut off ties with Germany and Italy. This has been described by historians as aimed a speedily realigning ties with the Soviet Union, while only “ostensibly” being in retaliation for a decision by Berlin and Rome to establish formal ties with the rival pro-Japanese regime in Nanjing, led by Wang Jingwei.

The significance of this move has probably been somewhat overstated in the literature so far. Finland and Denmark are the only two other instances in 1941 of countries that opened formal ties with the Nanjing regime despite existing ties with the Chongqing government. In both Nordic cases, Chiang reacted by severing ties. In other words, this was the normal way of reacting to this type of development.

Moreover, the actual implications of cutting ties with Japan’s European Allies were limited. In the 1930s, Germany had been China’s primary source of foreign weaponry, and German advisors had been deeply involved in attempts to modernize the Chinese Army. As Germany had gradually shifted its sympathies in favor of Japan, the utility of maintaining formal ties with Berlin had been radically diminished, and by the summer of 1941 there was no advantage left in the partnership as far as China was concerned.

At the same time, the German recognition of the rival regime in Nanjing was a direct existential challenge to Chiang. The Japanese-backed government in Nanjing was set up as the legitimate government of all China, and its leaders depicted themselves as the rightful heirs to the Nationalist revolution that had ushered in a modern republic. It was impossible for Chiang’s regime to allow Germany to maintain ties with both Chinas. Breaking off diplomatic relations had little to do with making the Soviet Union happy, and everything to do with maintaining legitimacy.

After the futile appeals for Soviet participation in the war against Japan in 1941 the issue was put on the backburner until the fall of 1943, when Soviet victory over Germany was assured. On the surface, therefore, the appeals to the Soviet Union seemed to be a diplomatic failure. But if one is allowed to speculate a little, Chiang may not have been aiming only for a short-term gain, but also for a longer-term Soviet commitment.

There were other instances where Chiang attempted to exert long-term pressure on potential future Allies. He fought long and tenaciously in Shanghai in 1937, some might say too long, and one theory is he wished to garner sympathy with the American and British public and decision-making elites. In the words of his biographer Jay Taylor, he was “building sympathy for the future”.

So the question is: if appealing to Stalin did not work in the short run, did it work in the long run? While the struggle at Shanghai may have been effective with parts of the political establishment in the United States, the pressure Chiang exerted on the Soviet Union to enter the war against Japan made no visible difference to the Soviets. When the Soviet Union finally attacked in August 1945, the Kremlin was motivated by narrow self-interest, not by the accumulated effect of Chiang’s rhetoric over the preceding years.

One can also ask if it was a wise policy to keep bombarding Stalin with requests for intervention in the war. Some Chinese historians tend to think that Chiang’s continued appeals to the Soviet Union to go to war with Japan showed little appreciation of the desperate Soviet struggle with its German enemy and that it caused ties between Chongqing and Moscow to deteriorate.

But to complete the picture, failure must also be measured against the cost one has incurred. And specifically in this case the cost paid by Chiang in the summer of 1941 was limited. His expenditures were in the form of rhetorical support, a fair amount of misinformation, and one concrete move: the end of formal diplomatic ties with Germany. It seems that Chiang’s tactic was to take maximum advantage of the new situation, at a minimum of cost.

How does Chiang emerge from this? We see the outlines of leader who had a clear idea of where the strategic situation was headed, also clearer than most of his compatriots or allies in other countries. From the moment Barbarossa was unleashed, he understood that the end result would be German defeat, and he also predicted rightly that Japan would remain passive rather than launch an assault across the Soviet Union’s eastern borders.

If he had one shortcoming, it was a failure to see the collateral costs of too insistent diplomacy. By repeatedly urging the Russians to intervene against Japan, even at a time when they were fighting for their lives, he came across as being self-centered and insensitive. It’s a mixed picture. Perhaps he should be described as a leader with high IQ but moderate EQ.

Image: Generalissimo Chiang Kai-shek, Mr Roosevelt and Mr Churchill in the grounds of Roosevelt’s villa in Cairo, November 1943, via the Imperial War Museum.

3 thoughts on “1940-1942: THE FULCRUM OF THE TWENTIETH CENTURY? ‘Halfway Out of National Danger’: Chiang, Stalin and the Chinese Reaction to Barbarossa”